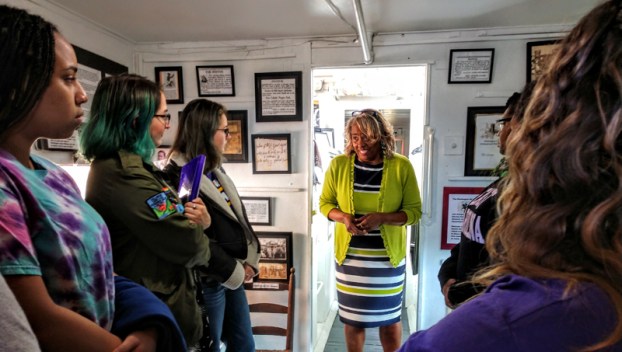 NEW PERSPECTIVE. Leesa Jones held eight East Carolina University students spellbound this week at the Washington Waterfront Underground Railroad Museum. She shared stories of empowered women who, although slaves, were able to use “ingenuity, creativity and courage” to do everything from creating coded messages with information about escape routes to finding herbal solutions for the complications and dangers created by the frequent molestation of female slaves. The group was taking part in the university’s 10th-annual Alternative Break Experience Program. (Karen Thiel)

Several undergraduates who could have whooped it up during spring break spent a few days in Washington, learning about local and worldwide women’s issues.

As part of East Carolina University’s 10th-annual Alternative Break Experience Program, the eight women are among more than 75 students who spent most of this week learning to “address a variety of causes,” according to an ECU press release. Trip locations included Greenville, Asheville, Raleigh and Wilmington, plus Columbia, South Carolina and Washington, D.C.

“They were great, interesting, curious and really wanted to learn,” Mehlich said of the students, adding that her time with them included advice to “never let go of your passion; you may have to put it on the back burner, but don’t ever give up.”

Lauren Givens echoed that sentiment after visiting the Washington Waterfront Underground Railroad Museum, where founder Leesa Jones held the group spellbound with stories of Washington-based plantation owners and slaves who inspired her to create the local landmark.

“No matter how different they were, they all ended up meeting their goals. Their dreams were made real, no matter how rough their road or how long it took to get to their goals,” said Givens, a public-health major.

The collegians said perseverance, focus, humor, determination, strength, courage and a sense of community were common to everyone they met.

“The women in this town aren’t afraid to pivot. Everyone we’ve spoken to has done that,” said Caitlin Friello, an Air Force veteran and the group’s student lead. “Just because you’ve made a decision about your major doesn’t mean you’re stuck with it for the rest of your life.”

“It was like a shock that there are just so many inspiring women here, going for what they believe in,” said psychology major Naomi Rollar, who noted that most businesses in her part of New Jersey are male-owned.

Naomi Gardner, a 51-year-old PHD graduate in ECU’s Student Affairs Certificate program, said Leesa Jones’ presentation confirmed that “We need to have uncomfortable conversations in order to bring the community together, especially now that our country is so divided.”

The daughter of a sharecropper, whose great-great-grandfather escaped being lynched, Gardner said “it’s been beautiful” to hear so many strong women share their experiences.

Stop the rumors, call out misinformation

If there’s one thing that spreads faster than any contagion, it’s misinformation. In the time it takes to hit “send,”... read more