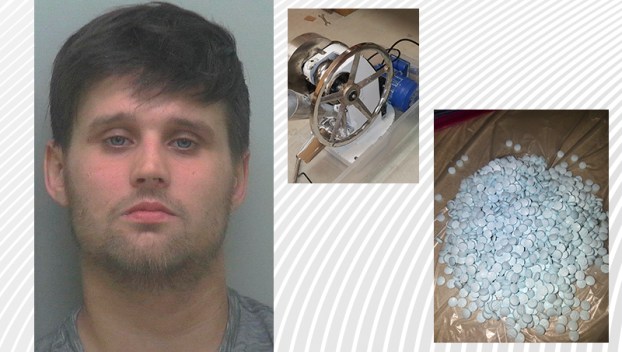 A Washington man has been accused of manufacturing pills with the powerful synthetic opioid fentanyl in his Pamlico Plantation home.

Dylan Holcomb, age 26, was charged Thursday with two counts each of trafficking, manufacturing and transporting in opioids (fentanyl), as well as maintaining a vehicle and residence for the purpose of storing and selling a controlled substance, possession of a firearm by a felon and possession of drug paraphernalia.

According to Lt. Russell Davenport, head of the Beaufort County Sheriff’s Office Drug Unit, both the DEA and the local drug unit were receiving information that Holcomb was making pills laced with fentanyl, prompting drug unit investigators to put in many hours of surveillance.

“With information from the DEA, and based on our surveillance and complaints that we received, we established enough probable cause to get a search warrant,” Davenport said.

Inside the home at 104 Tupelo Lane, investigators found a pill press, approximately 10 grams of powdered fentanyl, more than 1,500 fentanyl-laced pills, more than 400 Xanax-shaped pills, packaging material, a digital scale, U.S. Post Office shipping packages and a custom-built 9mm pistol with a suppressor, according to the drug unit press release. Davenport estimated the street value of the drugs to be about $100,000.

“The bust was a priority on our list when we figured out the pills were being made there. We know the dangers of people overdosing, not only to the people taking them, but to the people manufacturing them,” Davenport said. “When we figured out on our surveillance what was going on, it was more important for us to stop it — especially in a house or in a neighborhood where somebody could get exposed (to the drug) or hurt. And that’s any neighborhood — any neighborhood is in danger where there’s something going on like that, where there’s some risk of exposure.”

According to the Centers for Disease Control and Prevention, fentanyl is 50 to 100 times more potent than morphine and its misuse behind many drug overdoses.

In order to search the house, the assistance of both the State Bureau of Investigation and the DEA was required, Davenport said.

“We have to get them involved because of the type of investigation. When you’re dealing with fentanyl, that’s just a like a meth lab, it’s dangerous,” Davenport said. “We have to call in the SBI to go in and make sure there were no toxic or dangerous materials in the air, so we can search the house. … This type of investigation, the feds are the only ones that have the funding to clean up this type of toxic material, so they had to call a specialized (DEA) crew to decontaminate the pill press and the area where the pill press was located. … SBI is funded to clean up meth labs, but not funded to clean up other labs.”

Davenport said the pill press found in the home would press multiple pills at a time. The chemical makeup of the Xanax-shaped pills remains unclear.

Davenport said it was the first pill-manufacturing lab he’s seen in 23 years working in the drug unit.

Holcomb purchased the Pamlico Plantation house in July 2019. He is being held in the Beaufort County Detention Center under a $750,000 bond.

The City of Washington has been monitoring developments with COVID-19 (2019 novel coronavirus) since its inception. When responding to an... read more