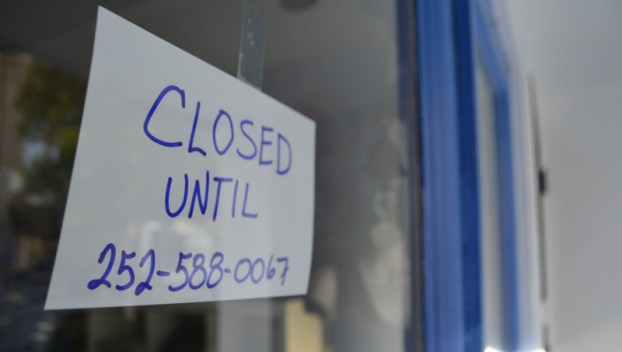 As health officials make tough decisions at the local, state and federal level to help prevent the spread of COVID-19, area business owners are also wrestling with an important question — to close, or not to close?

While the majority of businesses in Beaufort County remain open to the public, many have announced special operating procedures, event cancellations or even outright closures.

One such business is The Secret Garden Gallery and Boutique on Washington’s Main Street. Secret Garden owner Barbara Hardy, who also owns the adjacent Lofts on Main, made the decision to temporarily close her businesses starting Monday. Though Hardy says closing her businesses will be painful financially, she hopes that shoppers will step up to support local merchants again once things return to normal.

“The main reason is, I think it’s the right thing to do right now,” Hardy said. “We would love to be open and selling, because that’s our livelihood. I think the socially responsible thing to do is to close right now and see what happens.”

On the other hand, many businesses remain open, though are taking extra precautions. Amy Gerard, who owns Fitness Unlimited, says the gym will remain open until further notice, while closely following recommendations from the Centers for Disease Control and Prevention. She says her staff has stepped up their regular cleaning of equipment, but the gym is also encouraging members to help prevent the spread of disease in the facility.

“One of the main things we’ve done is asked the members to take some responsibility,” Gerard said. “All they keep telling me is they want me to stay open regular hours, and I’m like, ‘I would love to, but that depends on you.’ … I’ve told my staff and members, if they want normalcy, I need them to help us. ’”

Even still, other business owners are still on the fence about closing, weighing financial pains against doing their part to stop the spread of the illness. At Little Shoppes and South Market Antiques, co-owners Rebecca Clark, Pat Lewis and Jayne Meisell had a meeting Monday night to discuss options for the antique store and the newly opened Cups and Cones location on Water Street.

“There’s the financial dilemma, and there’s the moral dilemma,” Clark said. “The financial dilemma is we’ve got two businesses, one that hasn’t even been open a week. The prospect of closing is financially devastating. But then the other issue is, if we don’t close, are we exposing people to possibly catching this virus just by the fact that we’re open and encouraging people to support local business and shop local? It’s an awful decision we have to make.”

As concern grows regarding COVID-19, these are decisions many business owners will have to weigh for themselves, and there’s not always clear guidance whether they should stay open or close their doors. As for now, the CDC recommends encouraging sick employees to stay home, practicing good hygiene and routinely cleaning the work environment.

“I did a reach out on Facebook (Sunday) night, and I’ll be honest with you, it’s 50/50,” Clark said. “Some people are saying, ‘Keep going — it’s important for small businesses to be open,’ and some were saying, ‘Close — you don’t want to expose anyone and encourage people to come out.’ So it didn’t help our decision. There’s validity to both arguments.”

On Monday morning, the North Carolina Department of Health and Human Services posted the latest numbers. At that time, there... read more