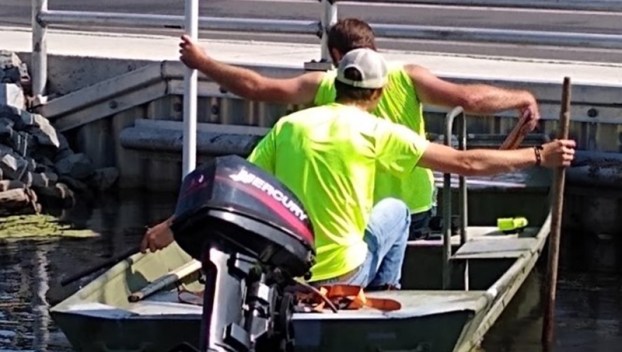 A surveying team recently measured North Boundary Canal at North Road Street in Columbia in preparation for dredging and clearing work in the waterway. (contributed photo)

The planned dredge work is still going to happen on three canals in the county: North Boundary, which intersects North Road Street; Bridgepath Canal which intersects Bridgepath Road; and Roughton Branch Canal, which flows from the prison to Albemarle Sound.

The funding for this project came from Disaster Recover from Hurricane Matthew in 2016.  Through this funding we were able to hire on WK Dickson and Rivers & Associates to do all of the permitting, bidding, etc.

The preliminary tasks were started on this project just when Hurricane Dorian came through in September 2019 and blew down more than 50 trees into these three canals that are planned to be dredged, preventing us from doing any surveying of the bottom and making the planned engineering drawings, pretty much putting the project on hold.

The Town of Columbia was able to get the North Boundary Canal cleared of trees so that we could proceed with surveying and the permitting.

In early March, representatives of the two engineering firms and I met in Washington [N.C.] with multiple regulatory agencies, including Army Corps of Engineers, CAMA, NCDOT, DENR, and Wildlife Resources Commission, to find out all of the environmental regulations that will be enforced on this project.

In January, I submitted an application for Disaster Funding from Hurricane Dorian, and in late February we were awarded $101,670 from the N.C. Department of Agriculture to clear and snag trees blown into waterways by Dorian.

Now that funding has been procured for the removal of debris from Dorian, we can proceed with the dredge work from Matthew.

The Lindsay Warren bridge that carries U.S. 64 traffic over the Alligator River was closed about three hours on Mar.... read more