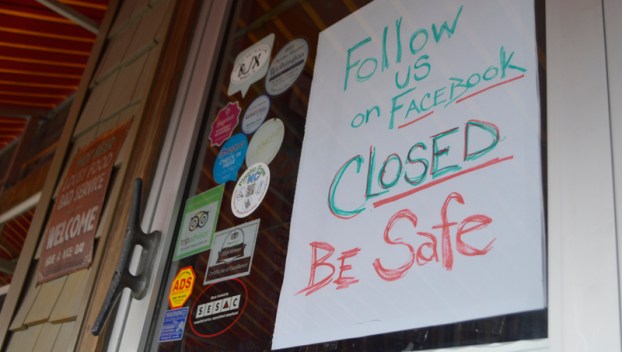 All weekend, Backwater Jack’s and Highwater Social co-owner Laura Scoble was seeing signs that her businesses might have to close down for a while.

First, it was hearing the city had closed libraries and recreation facilities Friday. Then, there was the news on Saturday of schools closing. The final straw was passing First Christian Church this weekend and seeing that services had been canceled.

“It hit me like a ton of bricks,” Scoble said Tuesday. “I have been struggling all day with this.”

Scoble and her business partner, Cathy Bell, had already made the decision to temporarily close before North Carolina Gov. Roy Cooper announced an executive order shutting down dine-in services in N.C. bars and restaurants Tuesday. Takeout and curbside services are still allowed.

On Tuesday, the team at Backwater Jack’s gathered for a staff meeting and a tough announcement — at least two weeks out of work.

“I don’t believe it’s just going to be two weeks,” Scoble said. “We need to plan for much longer, but I said, ‘We’re all there for each other. You need something, you call us, and we’ll keep everybody afloat as much as we can.’ It’s just so sad.”

With the meeting concluded, Scoble and Bell loaded up their employees with as much food as possible. The rest, they took to Zion Shelter and Kitchen to be used to feed those in need during a particularly difficult time.

“My struggle was, we want to be part of the solution and not part of the problem,” Scoble said. “We don’t want to have one person that comes in and gets sick because of this, or dies. On the other hand, we’ve got employees that live week-to-week and expenses that go on regardless of if we’re closed or open.”

Joan and Roger Meyland, who own Grub Brothers and The Bank Bistro in downtown Washington, are also feeling that same kind of pressure. For them, the news of the closure means figuring out a new way of doing business. Both restaurants are figuring out the logistics of curbside service, all while the Meylands try to keep their staff at work.

“We’re going to do exactly what the state tells us to do, and we understand it’s for everyone’s benefit,” Roger Meyland said. “We’re going to do take out and delivery so you can drive up to the curb, and we’ll walk it out to you. We’re going to try to spread the work shifts out among all our employees so everybody that wants to work a little bit will be able to. That’s about all we can do until they tell us otherwise.”

While Grubs, The Bank and a number of other local restaurants will be able to provide curbside service for food, and possibly beer and wine if they have an off-site permit, for bars like Market Street Pub, curbside service is not an option.

“We don’t have food. We have nothing but beer, liquor and wine, and that’s how we pay the bills and pay our employees,” said Market Street Pub owner Connie Bland Langley. “It’s going to hurt a lot of us. A lot of small bar owners are not out here making beaucoups of money. We’re basically month-to-month, as it is. For us to be shut down for two weeks to six weeks to 12 weeks, it’s really going to put a damper on us.”

The order to close came at the worst possible time for Market Street — right as the bar was about to kick off its annual St. Patrick’s Day celebration. Langley added that she’s apprehensive about having to pay the state $2,000 next month to renew the Pub’s liquor license, especially if the business is closed down for an extended period of time.

“This is affecting the country as a whole,” Langley said. “There are a lot of people out there that aren’t going to have income.”

For the latest updates on closings, cancellations and special arrangements at local businesses, visit www.thewashingtondailynews.com/2020/03/17/closings-cancellations-and-special-arrangements.