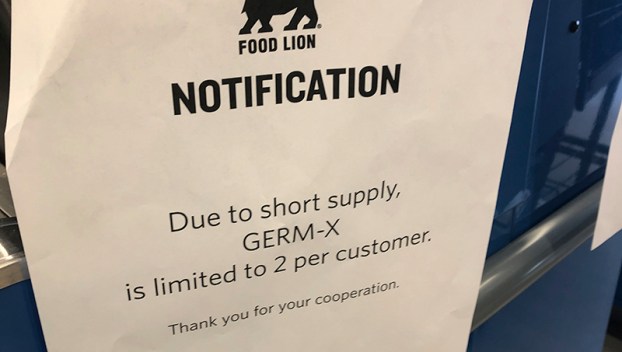 LIMITS: At Food Lion on Sunday, shoppers were limited to two bottles of Germ-X hand sanitizer  per purchaser. Limits such as these will likely remain and residents are being asked not to over-buy and/or hoard supplies. (Vail Stewart Rumley/Daily News)

As the number of cases of COVID-19 have grown in the U.S., so have the number of empty shelves in local grocery stores, pharmacies and more. But officials are encouraging residents to go back to their normal purchasing habits, because more goods are on the way.

“What you’re seeing now is empty shelves of meats and canned goods. Bread was getting that way, milk,” said Chris Newkirk, chief of fire/emergency management at Beaufort County Emergency Services. “We’re used to seeing that during a hurricane, those empty shelves, but what I’m seeing in the stores is surpassing that.”

The empty shelves are only temporary, however, which means shoppers should not over-shop out of fear that stores will not be restocked.

“At the moment, it doesn’t not appear to be a supply issue at the distributors; it’s the demand issue,” Newkirk said. “It’s really strained the distributors to keep the shelves full — it’s not that they don’t have it, it’s just getting it here.”

Newkirk said the North Carolina State Office of Emergency Management’s emergency operations center has a activated its section that focuses solely on commodities, monitoring the supply chains of grocery and other retail stores. On Monday morning, representatives from distributors for Wal-Mart, Food Lion and other major grocery chains reported that commodity sales over the previous three days had exceeded what is normally sold in a month, a press release from Beaufort County Public Health reads. They also said they have the supplies needed to replenish stores and have begun to do so.

“(EOC) had a conference call with the national distributors and that was the message that was given them from those distributors,” Newkirk said.

The state has lifted some travel and weight restrictions for transport services to facilitate the restocking of shelves across the state.

Newkirk said paper products and Clorox spray cleaner had already returned to Lowe’s. It is likely that retail businesses will continue to limit the number of certain products purchased per individual — for example, Food Lion on John Small Avenue in Washington limited purchase of  Germ-X hand sanitizer to two bottles per person this weekend.

The state and local offices of emergency management are encouraging residents to refrain from bulk buying and/or hoarding.

“It goes against our ingrained habits and behaviors. We feel like in times of emergency that’s what we have to do, and here I am asking you not to do that. We’re asking you to have faith. Our distributors are asking the same of us. We realize there’s going to be some uneasiness about that. We’re putting our trust in the individuals at our distributors — they’ve told us they can keep us in stock,” Newkirk said. “It’s against our nature to what we typically do in the case of emergency, but in this case, it’s the best thing we can do.”

The Latest on the world’s coronavirus pandemic, which has infected more than 190,000 people and killed more than 7,500. The... read more