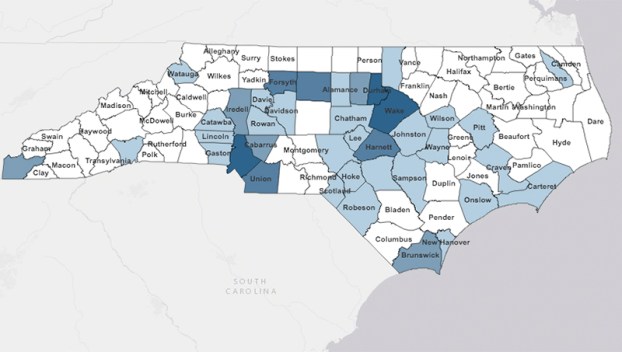 The number of confirmed cases in the U.S. went from 24,148 confirmed cases Saturday to 32,644 cases on Sunday; 402 deaths are attributed to the virus nationwide. Five percent of all active cases are considered serious, requiring hospitalization — down from 19% three weeks ago, according to Beaufort County’s Office of Emergency Services.

Another case was thought to be confirmed in Hyde County on Saturday, but according to Hyde County government, though this person has a residence in Hyde County, he or she was tested and in isolation in another county.

On Saturday, Beaufort County had no confirmed cases. Beaufort County Public Health has tested 20 people for COVID-19, according to the most recent update from Beaufort County Emergency Services. Eleven tests were negative. Sunday, BCPH was awaiting results on the other nine tests. Tests results currently take between 24 and 72 hours.

Eight cases in the state have been attributed to community spread, including cases in Onslow and Wilson counties.

“This is a normal and expected progression of communicable disease pandemics such as COVID-19. However, frequent hand washing and continuing to practice social distancing is the best way to fight community spread,” the Sunday update from Beaufort County Emergency Services reads.

Beginning Monday, Beaufort County will expand from the Health Department Emergency Operations Center to a County EOC to provide support for essential county and municipal functions.

Public access will also be restricted to Beaufort County government buildings starting on Tuesday. Guidance for conducting business with various department will be posted at each building, as well as included in Monday’s update.

RALEIGH — The county that includes North Carolina’s capital on Sunday announced strict prohibitions on gatherings and movement that are... read more