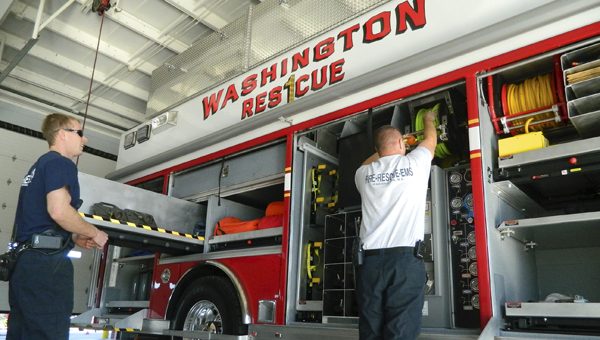 VAIL STEWART RUMLEY | DAILY NEWS ON THE JOB: Capt. Johnathan Hardin (left) and Capt. R.M. Flowers inspect the Washington Fire-Rescue-EMS rescue truck when it arrived in 2012. The grant for the truck spurred the department’s three-year journey from light rescue to heavy rescue certification.

The City of Washington is working to reduce the spread of COVID-19, through social distancing while still maintaining service to the public. In order to limit the exposure of Washington public safety personnel during the performance of their duties the following safety precaution guidelines are in effect.
WASHINGTON POLICE DEPARTMENT

The following services are suspended until further notice:

Reports can be obtained Mondays through Fridays from 8 a.m. to 5 p.m. Emergency calls will be dispatched, as usual.
WASHINGTON FIRE/RESCUE/EMS