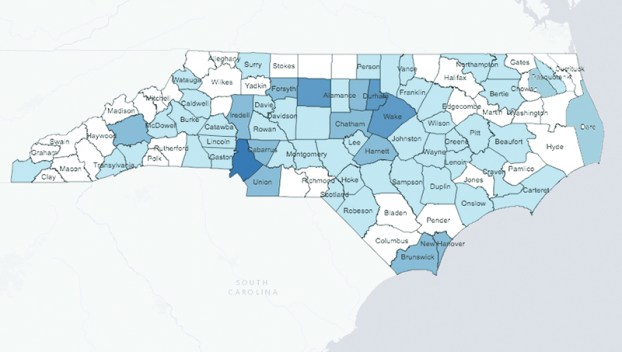 The number of confirmed COVID-19 cases in North Carolina continued to rise from 680 on Thursday to 844 on Friday. There have been four deaths in the state attributed to the virus.

In a Beaufort County, a fourth case was confirmed Friday. According to Beaufort County Health Director Jim Madson, the fourth person has been hospitalized.

The number of confirmed cases in the U.S. went from 79,785 on Thursday to 96,212 Friday; the U.S. now tops the list worldwide in number of cases. There are likely many more cases as those exhibiting symptoms are now being encouraged to stay home rather than get tested. Nationwide, 1,475 deaths have been attributed to the virus. Four percent of all active cases are considered serious, requiring hospitalization — down from 19% in February, according to Beaufort County’s Office of Emergency Services.

The state has confirmed cases in 64 counties, and 77 people have been hospitalized due to COVID-19.

Starting Monday, Beaufort County Health Department will no longer provide community testing due to limited supplies. Most medical providers in the county can conduct the COVID-19 test, according to the Friday update from Beaufort County Emergency Services.

“Alternative surveillance tools will be used to track the spread in our county. Tracking only lab-confirmed cases is not a reliable or accurate way to understand the pandemic; therefore, the health department will use influenza surveillance tools designed to track widespread respiratory illness,” the update reads.

All Beaufort County residents should: