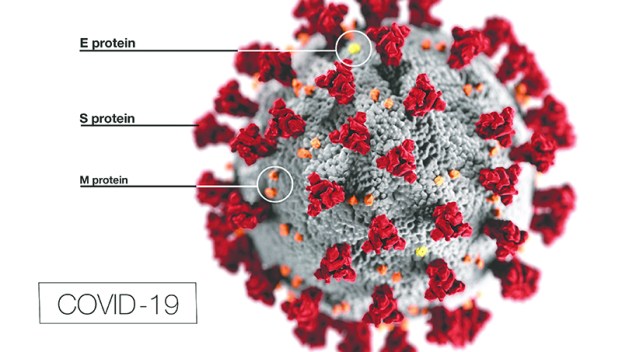 Alissa Eckert, MS; Dan Higgins, MAMS Description: This illustration, created at the Centers for Disease Control and Prevention (CDC), reveals ultrastructural morphology exhibited by coronaviruses. Note the spikes that adorn the outer surface of the virus, which impart the look of a corona surrounding the virion, when viewed electron microscopically. In this view, the protein particles E, S, and M, also located on the outer surface of the particle, have all been labeled as well. A novel coronavirus, named Severe Acute Respiratory Syndrome coronavirus 2 (SARS-CoV-2), was identified as the cause of an outbreak of respiratory illness first detected in Wuhan, China in 2019. The illness caused by this virus has been named coronavirus disease 2019 (COVID-19).

The criteria for who gets tested for COVID-19 has changed, as the state makes a strategic shift in battling the virus.

Critical shortages of test kits, extraction kits and swabs, and personal protective gear, such as masks, gloves and gowns necessary to perform the tests has led the Centers for Disease Control and Prevention to put out new guidance for testing, which the North Carolina Department of Health and Human Services has adopted.

On Monday, the Beaufort County Health Department will no longer provide community testing for COVID-19, due to limited supplies, according to an update issued Thursday by Beaufort County Emergency Services, county government and the health department.

“The guidelines now are to cut back on testing,” said Jim Madson, director of Beaufort County Health Department. “As a state, North Carolina has gone into a mitigation mode, which is when you’re trying to cut back, slow it down to prevent the spread and not overwhelm the healthcare system. … What that means is that we’re probably not going to be testing a lot of people who have mild symptoms.”

Madson said the state and the local health department are now focusing on prevention instead of testing.

“Testing is to figure out where it is,” Madson said. “Once you get to the point that it’s spreading throughout a community, (testing) is not going to stop the spread anymore. … It also gets to be impractical when it gets to a certain stage.”

The previous criteria to be tested was the presence of fever, a negative flu test, and a cough or shortness of breath. The new criteria is fever, a negative flu test, and both a cough and shortness of breath, or other serious symptom. Hospitals and medical providers will continue to conduct tests for virus. Those with mild symptoms are asked to self-quarantine.

“If you have a mild case, you don’t really need a diagnosis for it,” Madson said. “Now, when you get a patient that’s truly ill, then you have to test to rule it out.”

In a press conference held Friday, Gov. Roy Cooper said, “North Carolina is now considered by the CDC to have widespread transmission” of COVID-19, which prompted a statewide “stay-at-home” order that will go into effect on Monday.

In the same press conference, Dr. Mandy Cohen, secretary of the North Carolina Department of Health and Human Services, said the order is absolutely necessary in order to not overwhelm the state’s health care system.

“We do not have the luxury of time. We must act quickly based on what we do know to slow the spread of the virus,” Cohen said. “The only way to prevent it is for fewer people to get sick at the same time. That’s called flattening the curve. Staying home saves lives.”

Click HERE to see North Carolina Department of Health and Human Services recommendations on what to do if you get sick.

The best reason of all

“And then the whole world walked inside and shut their doors and said — We will stop it all. Everything.... read more