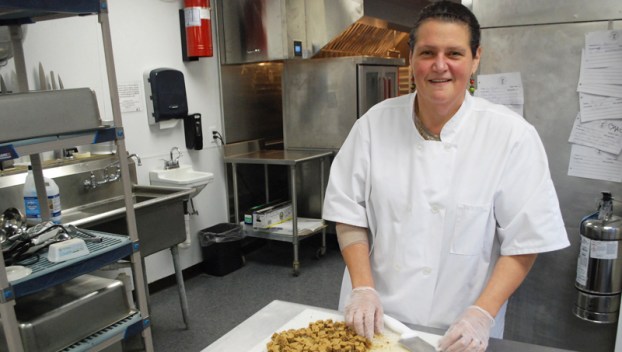 Community rallies behind carryout by Chrislyn’s

Through major hurricanes and other catastrophes in Beaufort County and parts surrounding, Carryout by Chrislyn’s has been there in heroic fashion. Led by owner Chrislyn Wedderien, the staff and a team of volunteers delivered 13,081 meals to first responders and residents across eastern North Carolina in the aftermath of Hurricane Florence, an action recognized with the Governor’s Medallion Award for Volunteer Service.

Now, the community is returning the favor, by helping out the owner of the popular catering and take-out business with a slightly different problem.

It started with Wedderien’s posting on Facebook early Sunday, a refrigerator used to store a large amount of the meat at the East Second Street business had died. More than 160 pounds of chicken and 20 pounds of sausage were lost. Since she couldn’t use it, she decided to offer it to those who could.

Wedderien gave away the meat to anyone who wanted to use it to feed their animals, as well as to the local animal shelter. By Monday, all the meat had been cleared out, but Wedderien was still left with a non-working refrigerator.

“I happened to see that post early that morning when it happened, and I used to be in the restaurant business, so I kind of identify with Chrislyn — not in the sense of being a local hero like her, but just understanding the stress of running an operation like that, and we actually had that happen to us one time when our walk-in (refrigerator) died. Everything inside it was spoiled, and insurance didn’t cover it,” said Alexis Davis, a local realtor and Washington resident. “That would be a huge expense for her at a time when they’re already on lockdown basically. … What she did for the community was beyond anybody’s imagination. She put out tens of thousands of meals and coordinated the effort to have them delivered (during Hurricane Florence). It was superhuman.”

Davis saw all the support Wedderien’s Facebook post drew and decided to act — she set up a GoFundMe account on Monday to raise money to replace the refrigerator. In less than 24 hours, Carryout by Chrislyn fans donated all the money needed.

“People were really supportive of and amazed by her actions. Anyway, I just set up the page — which isn’t hard to do — I made the first donation, then sat back and watched the community step up. It was pretty amazing,” Davis said. “It was shared a lot right away. We raised over $4,000 in about 22 hours. I’m not an expert on GoFundMe pages, but that’s pretty incredible.”

“It was phenomenal,” Wedderien said in response to the support from the community. “I was honestly just looking to give away these meats when I posted that on Facebook. For the community to turn around and give me a donation like that was just incredible. We’ll be able to purchase a brand new two-door refrigerator. That donation definitely helps keep us in business, and I couldn’t be more thankful.”

Davis said Wedderien deserves a break because she has done so much for others in a time of crisis.

“I have had private emails and texts about how much (people) love Chrislyn. They talked about how much she changed their lives — things like that. One lady donated $500. She said when she was going through a really rough patch in her life, she did part-time work for Chrislyn, and just being around her was such a joy, that she felt compelled to give that kind of a donation,” Davis said. “Chrislyn has had such a positive impact on people, personally, as well as around the community.”