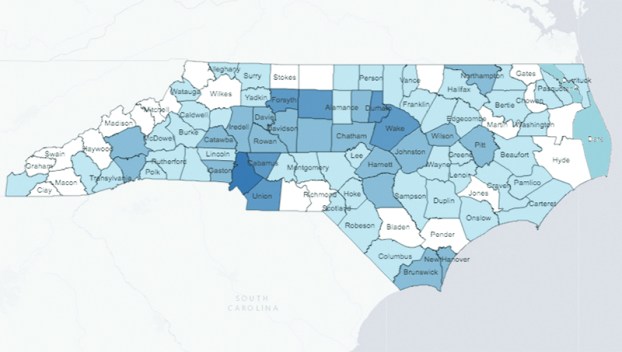 The number of confirmed COVID-19 cases in North Carolina continued to rise from 1,085 Sunday to 1,277 on Monday. There have been seven deaths in the state attributed to the virus.

In a Beaufort County, there were five confirmed cases of COVID-19 on Monday. According to Beaufort County Health Director Jim Madson, the fourth case is hospitalized.

The number of confirmed cases in the U.S. went from 130,025 on Sunday to 153,605 on Monday; this does not include the 5,579 people in the U.S. who have recovered from COVID-19. The U.S. has the greatest number of cases worldwide, and there are likely many more cases as those exhibiting symptoms are now being encouraged to stay home rather than get tested. Nationwide, 2,880 deaths have been attributed to the virus. Five percent of all active cases are considered serious, requiring hospitalization — down from 19% in February, according to Beaufort County’s Office of Emergency Services; 11% of all U.S. cases have been considered serious, requiring hospitalization.

Beaufort County had five confirmed cases as of Monday evening. One case has been contributed to direct contact with a known patient from another county. The second is still under investigation. The third case was attributed to recent travel to an outbreak area. The fourth and fifth are under investigation. All are self-isolating.

“There have been 85 tests completed in Beaufort County as of Monday night, with 61 negatives, five positives and 19 pending. (These are cumulative numbers and includes test performed at the Health Department and private medical facilities throughout our county.),” reads the Monday night update from Chris Newkirk, deputy director of Beaufort County Emergency Services.

What to expect in the future, according to the update:

“The Institute for Health Metrics and Evaluations has released its projections for COVID-19. Their data includes estimates of needs (i.e. hospital beds, ICU beds, ventilators) as well as peak cases for the U.S. and state-by-state. North Carolina is projected to peak on April 22. There has been improvement in resources and deaths per day since the ‘Stay at Home’ order was updated. You can view this information by using the following link: covid19.healthdata.org/projections (This may not work well in Internet Explorer). Use the drop down arrow next to ‘United States of America’ to view this data at a state level.”

City gets a jump on downtown streetscape project

The City of Washington moved forward with the plan to revamp Main Street on Monday, a few days ahead of... read more