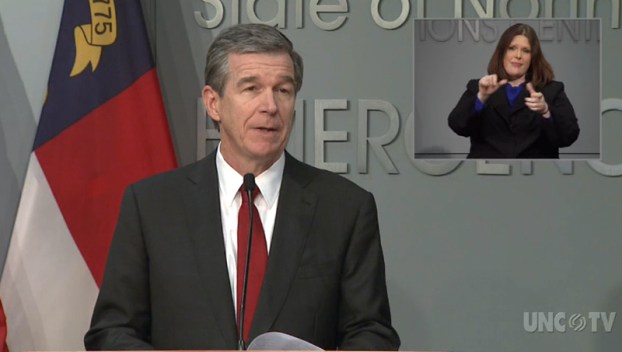 North Carolina Gov. Roy Cooper announced Tuesday that utility disconnections statewide will be suspended for at least 60 days under a new executive order.

“This action is particularly important since tomorrow is the first of the month, and I know that’s a date many families fear when they can’t make ends meet,” Cooper said. “Today’s action orders that electric, gas, water and wastewater services can’t be shut off for the next 60 days. Telecommunication companies that provide phone, cable and internet services are strongly urged to follow these same rules.”

The order also strongly encourages banks not to charge customers overdraft fees, late fees and other penalties. Evictions are also strongly discouraged under the order.

“These protections will help families stay in their homes and keep vital services like electricity, water and communications going as we stay at home,” Cooper said. “People should pay their bills, and the vast majority want to and do. But during this crisis, some just don’t have enough money.”

Locally, electric companies like Tideland EMC, Washington Electric Utilities and Duke Energy Progress are ahead of the curve. Earlier this month, the City of Washington announced that utilities would not be disconnected due to non-payment, but customers still needed to pay their bills. They can do so online at www.washingtonnc.gov, over the phone or via the dropbox on Second Street across from city hall. The city further announced this week that it will apply a 30% reduction to all April utility bills.

Duke Energy Progress and Tideland EMC, likewise, had announced disconnections would be suspended prior to the Governor’s announcement. Tideland encouraged its members to reach out to customer service representatives if they could not pay their bills.

“From March 23 to May 31, we are temporarily waiving late payment and service reconnection fees,” reads a statement from the Co-op. “Any member in financial distress and unable to resolve past-due or negative account balances will be exempt from suspension of electric service through May 31 and allowed to establish a repayment plan not to exceed six months to resolve uncollected balances that may accrue during this time.”

By Brandy Mann Tyrrell social services director For the safety of staff and the community, Tyrrell County Department of Social... read more