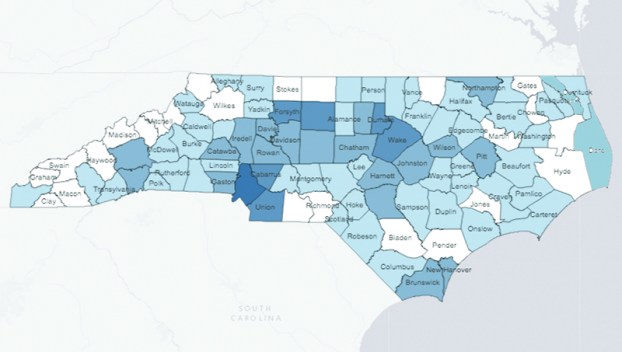 The number of confirmed COVID-19 cases in North Carolina continued to rise from 1,510 on Tuesday to 1,646 Wednesday. There have been 14 deaths in the state attributed to the virus.

The number of confirmed cases in the U.S. went from 181,099 on Tuesday to 206,204 on Wednesday; this does not include the 8,413 people in the U.S. known to have recovered from COVID-19. The U.S. has the greatest number of cases worldwide, and there are likely many more cases as those exhibiting symptoms are now being encouraged to stay home rather than get tested. Nationwide, 4,542 deaths have been attributed to the virus, an increase of 936 overnight. Five percent of all active cases are considered serious, requiring hospitalization — down from 19% in February, 11% of all U.S. cases have been considered serious, requiring hospitalization.

Of Beaufort County’s total of eight cases, contact tracing of these known, confirmed cases has concluded:

“There have been 104 tests completed in Beaufort County to date, with 80 negatives, six positives and 18 pending. (These are cumulative numbers and includes test performed at the Health Department and private medical facilities throughout our county.). Two of our positive cases were tested in other counties,” reads the update from Chris Newkirk, deputy director of Beaufort County Emergency Services.

“There is currently no cure or vaccine for COVID-19. Treatments are specific to the symptoms experienced by the individual and may range depending on severity. For example, over-the-counter medicines may be an effective treatment for fever, cough, body aches, etc. in some individuals. Others may require the services and treatments provided by a trained medical professional,” the update reads.

A man died by suicide on the Washington waterfront Wednesday afternoon, according to Washington Police and Fire Services Director Stacy... read more