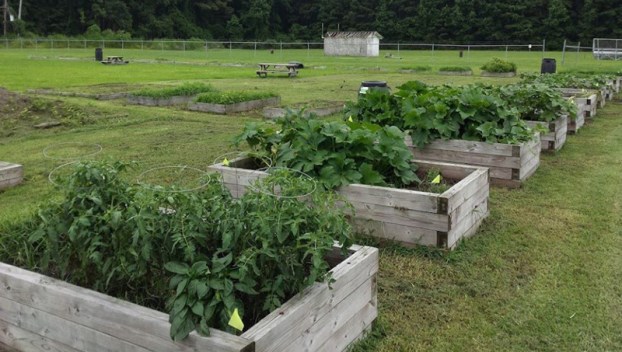 HELP IT GROW: With 36 raised beds filled with rich soil, there are plots available at the Aurora Community Garden for anyone who wants to grow their own food. (People for a Better Aurora/Richland Township)

AURORA — In the wake of a buying frenzy in retail stores across the country, many in Beaufort County have seen firsthand the empty shelves and low stocks of items they might take for granted in their daily shopping.

In Aurora, a community garden off of Middle Street is offering an opportunity for increased self-sufficiency by providing a place for local residents to grow their own food. With 36 raised beds for planting, the garden also offers a spot for people to get outside and enjoy the sunshine, all while maintaining a healthy distance from one another.

“It was set up way before I got here, and what I did in the winter was keep it all cleaned up and knocked down,” said Aurora Recreation Coordinator Curt Hendrix. “But it’s up and running and it’s free and these are big boxes. It’s a big area. It just seems like a good thing if you want to do something and get out of the house now. Go ahead and start a garden.”

Historically, Hendrix says April 15 is a popular day to start planting, with the last of the winter frosts in the rearview mirror. He hopes folks in the Aurora area will come out and grow some food.

“Last year, I planted squash, zucchini, sunflowers and pumpkins and watermelons,” Hendrix said. “The soil there is so rich that if you don’t check your squash every three or four days, they’re going to be as big as your arm. They get real big, real quick.”

As far as getting plants in the ground, Hendrix says the space is ready to go. To help the project, Nutrien donated a lot of rich soil for the garden, and there are rain barrels on site for watering. Hendrix takes care of the maintenance on a regular basis.

“If we’ve got to stay away from each other, the garden is a great idea,” Hendrix said. “I got here last year in the spring and thought the whole town would go crazy about it. Only one-third of it was even utilized. … This is a good thing. It’s out in the open, and you’re not in a concentrated area with other people. If you get more than you need, you can give it away. Share it with your neighbors.”

Anyone interested in claiming a box can contact Hendrix at aurorarec@embarqmail.com or reach out to him by phone at 252-531-3416.

The new way of living has caused many towns and cities across the region to change how they’ve done things... read more