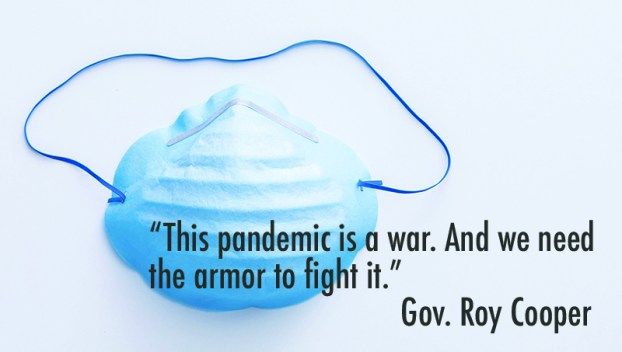 Three weeks out from the predicted peak of COVID-19 cases in North Carolina, emergency management agencies across the state are scrambling to secure personal protective equipment.

Beaufort County is likely better off than many other eastern North Carolina counties, according to Chris Newkirk, deputy director of Beaufort County Emergency Services.

“I will tell you, I feel like we’re going to be OK in Beaufort County. I think we put enough resources and enough contingency plans in place that if the models are any way accurate, we’re going to be able to endure through this initial wave until the end of May,” Newkirk said.

Nationwide, the supply of PPE cannot keep up with the demand, leaving county requests for equipment from the state unfulfilled, and state requests from the federal government unmet, as supplies are diverted to where they are most needed.

At a press conference on Friday, Gov. Roy Cooper said North Carolina has received three shipments of PPE from the Strategic National Stockpile, but the supplies from the federal government are a fraction of what the state requested.

“We’re grateful for these supplies. But to be clear, we’ve gotten just 33% of what we’ve asked for and told not to expect more anytime soon,” Cooper said.

According to Newkirk, the issue has trickled down to not only affect local supplies, but emergency services’ response.

During past emergencies, such as hurricanes, the statewide WebEOC system — crisis management software focusing collaboration between local and state governments, nonprofits and private business —  has allowed local emergency services to act as a conduit, requesting state assistance for local responders and tracking the status of those requests for resources. Now, local requests for PPE made on the system are getting no response.

“The status is that it can’t be filled. Stuff is going to the hospital systems first. First responders, local doctors’ offices, assisted living facilities are the next tier down. Unfortunately, when you’re dealing with scarce resources, you’re going to have the ‘haves’ and the ‘have nots,’”  Newkirk said. “It’s difficult on the resource side, and it’s also been a strain on relationships on the local level, because we’re the middle man. … I’m trusting that the folks at the state level are seeing things that we, at the county level, are not.”

Newkirk said the lack of response from the state has required those tasked with finding PPE to find other avenues for equipment.

“When we were scrambling for PPE, we had donations from personal businesses, Nutrien, farmers — just a network of people that stepped up when we put that call out — ‘We need masks; we need gloves.’ In Beaufort County, we are in a much better position than some of our counties around us,” Newkirk said. “We are very fortunate. We just have a good community network in Beaufort County where people seem to pull together when they need to. … We’ve got a really good group of first responders in our community that, hands down, have stepped up and come up with outside-the-box ideas, with contingency plans. I got to give them credit for it.”

The county is also partnering with Vidant Health to find safe ways to allow equipment to be reused by those coming in contact with the virus.

“It’s been very much a group effort for coming up with out-of-the-box way to get the best use of our limited resources,” he said.

Newkirk said he believes Beaufort County has enough PPE to maintain essential operations, but emergency management staffers are studying as many data models and forecasts to determine best-case, worst-case scenarios.

“It’s going to be the first of June before we return to the levels of where we are right now.

We’ve got a long ways to make this PPE work for us. … Little things can really trigger how fast you go through equipment,” Newkirk said, describing the outbreak of COVID-19 cases in Northampton County, where 35 people in, or associated with, an assisted living facility have contracted the virus.

It’s that type of community spread that can quickly deplete local resources.

“The most effective tool we have right now is our social distancing and just our hygiene and habits — we’ve got to social distance; we’ve got to wash our hands,” Newkirk said. “We’ve been lucky in Beaufort County, overall, to see a decrease in 911 calls. Our community is doing well in putting us in a position to ride this out. We’re not going to see the peak for another three weeks. It’s going to be real easy to fall back into those old habits and we can’t afford to do that.”

In the past two weeks, more than 10 million Americans have applied for unemployment insurance, including 370,000 in North Carolina.... read more