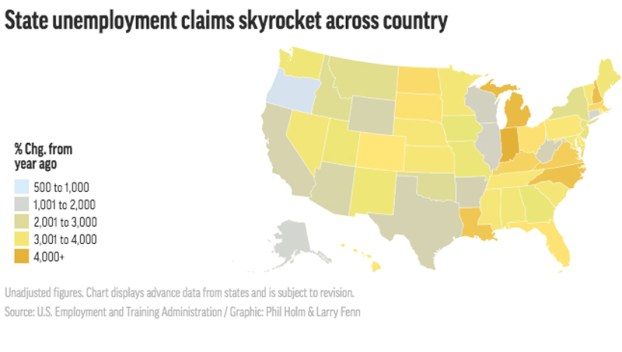 In the past two weeks, more than 10 million Americans have applied for unemployment insurance, including 370,000 in North Carolina. But many others, in Beaufort County and beyond, are still waiting to file, staring down a system at the N.C. Department of Employment Security that has essentially broken down.

“It’s been an absolute nightmare,” said Beaufort County resident Jack Willard. “As of (Thursday), the phone bank at DES was completely down. You get an automatic disconnect. It has completely imploded. If you pull up the DES site and try to log in, it will immediately crash.”

Willard, who is temporarily laid off while Belk of Washington is closed, is one of thousands of North Carolinians in the same boat. Trying to set up an account, he wasn’t even able to get a confirmation email from the system. While Willard says he and his family can get by for the time being, he knows that’s not the case for a lot of people.

“It’s been the most frustrating thing I’ve ever seen,” Willard said. “I’m not alone on this. There are hundreds and hundreds of people in the same situation.”

On the other end of the process, Joan and Roger Meyland, who own Grub Brothers and The Bank Bistro in Washington, say they told their employees to file immediately after North Carolina Gov. Roy Cooper ordered bars and restaurants to close for dine-in services on March 17. At this point, the Meylands say they have been able to get into the system to verify the claims their employees have filed.

“As their employer, we have to say, ‘Yes, this person worked for us and this is roughly their weekly pay and tips,’” said Roger Meyland. “(Joan) and I tried to get on there several times, and if you got on, the system just bogged down and wouldn’t go any further. But she’s been able to get on there and verify all the information they’re requesting, so I think that it’s easing up a little bit. But we’ve encouraged all our employees at both places to file.”

As of Friday afternoon, the North Carolina Division of Employment Security reported 370,000 North Carolinians have filed for unemployment insurance assistance since March 16, more than 100 times the prior average of 3,000 claims per week.

“We understand that many have had issues getting through on phones,” N.C. DES Assistant Secretary Lockhart Taylor said Thursday. “This is unacceptable, we are taking immediate action and working around the clock to help. We are adding staff and modifying our phone system to increase the capacity of our phone lines, and we are increasing the capacity of our online servers as well. We believe the system is becoming more stable every day.”

According to a Friday press release from the DES, those actions include:

Following these initial steps, the division will have more than 850 people working to process unemployment claims.

Individuals can file for unemployment benefits online at des.nc.gov. Those who have internet access are encouraged to check the website for updates and answers to their questions before calling the customer call center. People without internet access should call 888-737-0259 for assistance.

AURORA — In the wake of a buying frenzy in retail stores across the country, many in Beaufort County have... read more