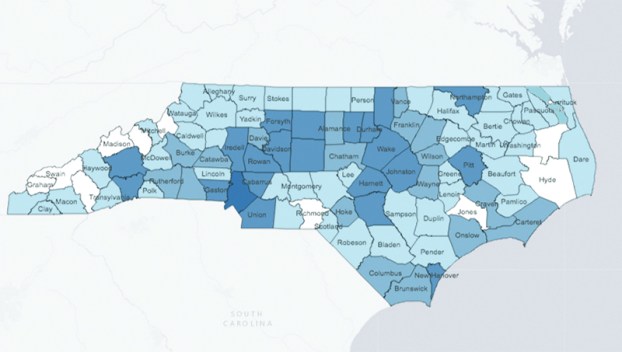 The number of confirmed COVID-19 cases in North Carolina continued to rise from 2,900 Monday to 3,270 on Tuesday. There have been 50 deaths in the state attributed to the virus and 354 hospitalizations. According to Beaufort County Health Department Director Jim Madson, four of those hospitalizations have been Beaufort County COVID-19 cases, three of which remain hospitalized. The fourth has been released.

The number of confirmed cases in the U.S. rose from 356,942 Monday to 386,817 cases on Tuesday; these numbers include the 20,191 people in the U.S. known to have recovered from COVID-19. The U.S. has the greatest number of cases worldwide, and there are likely many more cases as those exhibiting symptoms are now being encouraged to stay home rather than get tested. Nationwide, 12,285 deaths have been attributed to the virus, an increase of 1,761 overnight. Five percent of all active cases are considered serious, requiring hospitalization, down from 19% in February; 11% of all U.S. cases have been considered serious, requiring hospitalization.

Of Beaufort County’s total of 10 cases, contact tracing of these known, confirmed cases has concluded:

All active cases are self-isolating, the update reads. Four of the cases are currently active.

As of Tuesday, there have been 124 tests completed in Beaufort County, with 111 negatives, eight positives and five pending. These are cumulative numbers and include tests performed at the Health Department and reporting private medical facilities throughout the county. Two of Beaufort County’s positive cases were tested in other counties.

Cases of COVID-19 are now projected to peak on April 13.

Local models use the baseline of the 2017-18 flu season, in which 6,450 Beaufort County residents were impacted, with 118 hospitalizations and nine deaths. Based the differential of communicability between that flu and COVID-19, if no preventions were taken to prevent the spread of COVID-19 by county residents, there would be 192 hospitalizations, 46 ICU patients and 15 deaths in the next four months, according to the Tuesday night update from the health department, emergency services and county government.

“We realize that the most prominent question remains. How many people in Beaufort Co. will contract COVID-19? The answer to this question continues to have a high level of uncertainty, because it is dependent upon variables such as, adherence to social distancing interventions, personnel hygiene habits, contact tracing, environmental factors, etc. Without these interventions, our model estimates that up to 20% of our county’s population (or 10,504 people) could be impacted by COVID-19, with most being mildly symptomatic,” the update reads.

“It is important to remember that these models are not a crystal ball and are for planning purposes. As residents of Beaufort County, we are in a position today to determine how badly COVID-19 will impact our communities in the future. Please continue to practice social distancing. Do not have gatherings of more than 10 people. Disinfect surfaces. Wash your hands frequently and avoid touching your face. If you feel sick, stay home and isolate yourself from others.”