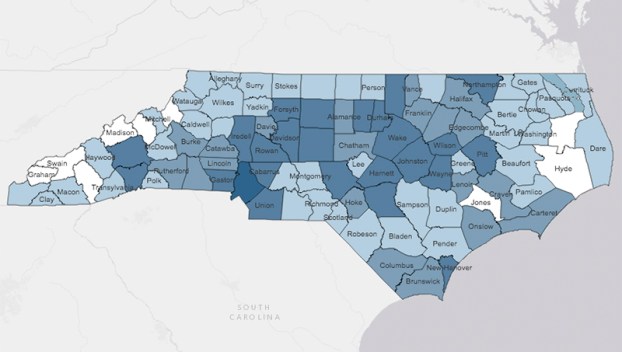 The number of confirmed COVID-19 cases in North Carolina continued to rise from 3,270 Tuesday to 3,472 Wednesday. There have been 63 deaths in the state attributed to the virus and 386 hospitalizations. According to Beaufort County Health Department Director Jim Madson, four of those hospitalizations have been Beaufort County COVID-19 cases; three of those cases remain hospitalized and the fourth was released.

The number of confirmed cases in the U.S. rose from 386,817 Tuesday to 423,135 Wednesday; these numbers include the 22,966 people in the U.S. known to have recovered from COVID-19. The U.S. has the greatest number of cases worldwide, and there are likely many more cases as those exhibiting symptoms are now being encouraged to stay home rather than get tested. Nationwide, 14,390 deaths have been attributed to the virus, an increase of 2,105 overnight. Five percent of all active cases are considered serious, requiring hospitalization, down from 19% in February; 11% of all U.S. cases have been considered serious, requiring hospitalization.

Of Beaufort County’s total of 11 cases, contact tracing of these known, confirmed cases has concluded:

The Beaufort County Health Department is now recommending, as is the Centers for Disease Control and Prevention, that the general public use cloth facemasks/coverings while out in public as an additional method of preventing the spread of COVID-19. They do not recommend the public use surgical masks or N95 masks, as these should be reserved for medical providers in medical settings.

For more on facemask recommendations, see the Friday issue of the Washington Daily News.