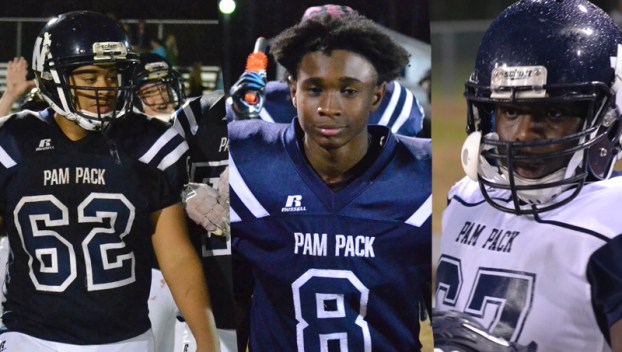 Godley, the starting quarterback and the 2-A Eastern Carolina Conference player-of-the-year, said he’s ready to get to work.

“It feels amazing. I’m just ready to get back out there on the field,” Godley said. “It’s a new leaf. It’s always a special moment for kids my age to go off to college and start a new beginning.”

Head football coach Perry Owens said Godley will be good at whatever position Wesleyan puts him in.

“Antwone’s stats are readily available and all that, but the fact of the matter is, he was the Conference Player-of-the-Year and deservingly so,” Owens said. “He will transition greatly into the college level at any position. He visited several schools, and Wesleyan discussed quarterback with him. He’ll go in there and play well at any position, but he has an opportunity to play quarterback. He has the ability to adjust to any situation and be successful.”

Where there’s a good quarterback, there’s a good center snapping him the ball. Bell is a high-IQ center that has a high-level of field vision and awareness, according to Owens.

“It’s amazing to have an opportunity to keep playing the sport I love at the next level. I didn’t think I would be in this position, and now that it’s happening, it feels so unreal,” Bell said. “The coaching staff at NC Wesleyan has been great. They have been reaching out every week and as camp comes around and the season gets started, I know I will get more comfortable. … I’m so excited for next year and ready to take the next step in my journey.”

Owens said Bell was a late bloomer, but came along to be one of the most physical on the field.

“He was the late bloomer for us. He got into the weight room as a junior and pushed really hard. His academics are through the roof with a 4.0-plus GPA. He’s what we wanted at center. He could identify the fronts, helped us coaches out on the sideline with how defenses were running their techniques; he’s a high-IQ kid,” Owens said.

On the other side of the football, Smith found ways to get into the backfield and cause disruptions. He will also be headed to Rocky Mount to play with his high school teammates.

“It all feels kind of scary, yet fulfilling, because it’s been a dream that I’ve worked hard for to get to this point,” Smith said. “I feel comfortable with the coaches at NCWC. From the beginning of recruitment, they really made me feel like they really wanted me as a part of the program. … I am most excited to meet a new group of guys who is hungry to win just like me, but more importantly, I get to further my education while doing something I love.”

Owens said Smith is an impressive player who will succeed at the next level.

“He’s explosive. He’s a 1,000-pound club guy. All three guys were the pillars in the weight room three years ago. (Smith) squats 500 pounds, 310 on bench press and he’s cleaning 230 to 240,” Owens said. “Physically impressive kid with a high-IQ and a motor. He played in a system that was multiple, in even and odd fronts, he understood his responsibilities.”

All three student-athletes will have the familiarity of their teammates heading to Rocky Mount, and Owens said the goal for his school is to continue sending players to college.

“All three of these guys have the ability to work hard and do right,” Owens said. “This is what we’ve been trying to work towards as a program. … We want to join the elite groups of high school programs in the east. We want to send players to college at any level every year. Anytime a school of 800 kids sends five to college, that’s a huge deal.”

Beaufort County represented well on the hardwood this season. A few teams made playoff runs, and there was a lot... read more