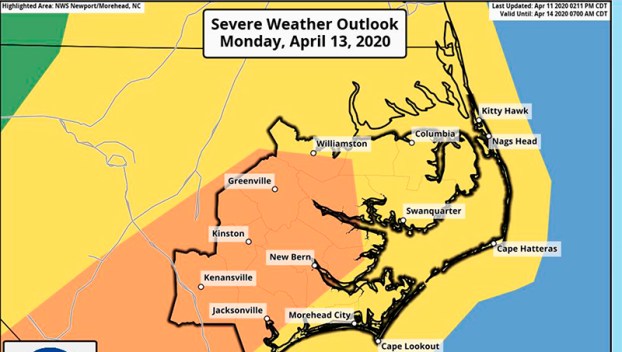 A strong cold front moving through eastern North Carolina on Sunday night through Monday brings with it a chance for severe weather.

According to the National Weather Service Newport/Morehead City office, the Storm Prediction Center has increased the risk for severe weather to “enhanced,” which is rare this far in advance.

Impacts for all of eastern North Carolina may include damaging thunderstorms and wind gusts, resulting in localized downed trees and powerlines and isolated structural damage, as well as the possibility of tornadoes. The forecast is calling for strong sustained winds in coastal Carolina, especially along the Outer Banks, and dangerous seas in all marine areas in eastern North Carolina.

The greatest impact is expected from early Monday morning through Monday afternoon. Maximum wind gusts between 30 and 38 mph are expected in Beaufort County.

“Confidence is increasing, but some uncertainty remains mainly with the timing and coverage of severe storms,” the NWS update reads.