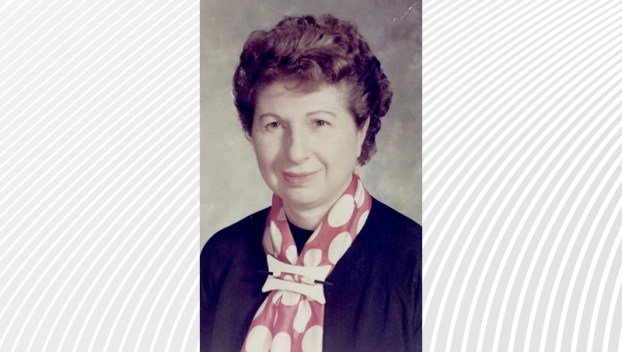 Mrs. Evans was born in Stokes on May 21, 1919, the only child of Jim Mooring and Lelia Stokes Mooring. She attended the Stokes Schools and graduated valedictorian of her class in 1936. She graduated from East Carolina Teachers College (now ECU) in 1940 with A.B. degrees in English, French and history. In 1943, she married James Alex Evans Jr., of Winterville, and lived in Winterville for the remainder of her life. Mr. and Mrs. Evans had one son, DeLyle Mooring Evans, born in 1947. Mrs. Evans obtained a Master’s Degree from East Carolina College (ECU) in 1960. As a result of receiving a John Hay Fellowship, she spent a year in study at the University of California at Berkeley in 1965-1966. She later wrote a book entitled “Berkeley Through Bifocals,” based on her experiences at the University of California. In 1966, she did post-graduate study at the University of North Carolina in Chapel Hill.

Mrs. Evans organized the first statewide annual Social Studies conference for the North Carolina Council for Social Studies and was its first president. She originated and directed a three-year Innovative E.S.E.A. Title III Project To Improve The Teaching Of Social Studies Through The Inquiry Method, and she served as an evaluator of Social Studies Departments of various high schools for the Southern Association of High Schools and Colleges. In 1969, she demonstrated the inquiry method of teaching at the National Council for Social Studies meeting in New York City. As a consultant for Holt, Rinehart and Winston Publishing Co., she conducted workshops for in service training for the Social Studies Department of Alma College in Alma, Michigan, and conducted workshops in how to teach social studies and history by the inquiry method in West Virginia, Virginia, and several school districts in North Carolina. She spoke on the inquiry method at the Southern States Work Conference in Daytona Beach, Florida, and attended the Innovative Educators’ Conference in San Francisco. Mrs. Evans was the N.C. State Delegate to the National Council for Social Studies Conferences in Houston, Texas, New York City, Denver, Colorado and Cleveland, Ohio, and attended a Social Studies Seminar in Mexico City, Mexico. She also served as a reader of College Boards American History Achievement tests for Educational Testing Service in Atlantic City, New Jersey.

She served three terms as president of the Pitt County Historical Society and served on its board of directors for several years. She was on the editorial staff for the Pitt County Chronicles, Volume 1, and served as fundraiser and chairman of the Survey and Publication Committee for the book entitled Historic Architecture of Pitt County, North Carolina, which was dedicated to her. She was a member of the Great Books Discussion Group in Greenville, and often led the discussions. She also served on the Board of Directors for the East Carolina Village of Yesteryear. For several years, she wrote feature articles for the Daily Reflector.

She was instrumental in retaining the Eastern Office of Archives and History in the Robert Lee Humber House in Greenville as well as contributing to the preservation of the Humber House itself. For her efforts, the Eastern Office established the LaRue Mooring Evans award in recognition of Meritorious Volunteerism in Historic Preservation, for which she became the first recipient.

In the fall of 2007, as a part of East Carolina University’s Centennial Celebration, Mrs. Evans was named as one of the 100 Incredible East Carolina University Women chosen to be honored by the Women’s Roundtable. The 100 women were ECU alumnae “recognized by their peers as outstanding leaders who brought honor to the university as well as to themselves.”

Mrs. Evans was predeceased by her husband, James Alex Evans, Jr., to whom she was married for 65 years. She is survived by her son, DeLyle Mooring Evans and wife Louise Bost Evans; granddaughter, Ashley Bost Evans Wildenmann and husband Joe Wildenmann; great-granddaughter, Addalyn Evans Wildenmann; and closest friends, Ella House, Juanita Pitt, Honorable Gwyn Hilburn, Dr. Michael Yavenditti and wife Mary Lu, Scott and Jane Power, and their son, Charlie. Her burial will be in the Winterville Cemetery followed by a memorial service at St. Paul’s Episcopal Church, 411 E. Fourth St., Greenville, when permitted. In lieu of flowers, contributions may be made to the LaRue M. Evans Endowment Fund for the Winterville Museum, P.O. Box 2014, Winterville, NC 28590

Arrangements are by Wilkerson Funeral Home and Crematory, Greenville.