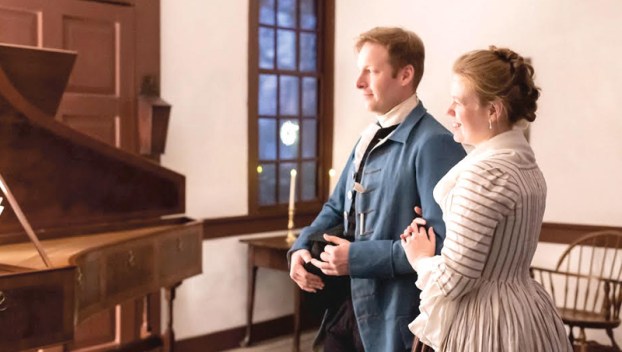 HAND MADE: Laura Rogers (right) the site director of Bath’s Historic Site and her husband Wade Rogers (left) dressed up for the Candle Light Christmas Tour at the site last December. Laura Rogers and her team of volunteers have been hand and machine sewing costumes to replicate past times in Bath. (Submitted by Laura Rogers)

BATH — A blast from the past is the experience Bath’s Historic Site is aiming to give to its visitors. Now staff is using some of its downtime while the Historic Site is closed to the public to sew costumes to wear for their living history events.

European settlement near the Pamlico River in the late 1690s led to the founding of Bath. It was named North Carolina’s first town in 1705. By 1708, Bath had 50 residents and 12 houses. Political rivalries, Indian wars and piracy marked its early years, but in 1746, Bath was considered for the colony’s capital.

“The costumes are for us to represent people from the past here at the site,” said Laura Rogers, the site director at the Bath Historic Site. “We make those in order to help the public understand the experience about what life would’ve been like during the time periods we represent here. We try to make them as accurate as possible.”

The site covers a lot of history, but the primary time periods represented are the 1760s, seen in the Palmer–Marsh house, and the 1830s, represented by the Bonner House, according to Rogers.

“The costume depends on the person we are trying to represent. For instance, if someone were to try and look like Joseph Bonner, they would wear very nice clothes. He is the gentleman that built the Bonner House, and he was a wealthy man, so his clothes would be reflective of his status. Whereas, one of his enslaved servants would be wearing something maybe with the same shape, but made with a cheaper material and not as nicely done,” Rogers explained. “Most of the costumes we have here are worn during events. For example, Pirates in the Port might be our next upcoming event when things get back to normal — it’s kind of hard to say when our next events will be right now — but we try to represent how the house would have been inhabited during that time period.”
Rogers said she enjoys making the costumes with the few other workers and volunteers who are helping with the costume sewing.

“The costumes are fun to wear. They really help you feel like you’re immersed in the time period a little bit. You get a better understanding of what people’s lives were like when they had to maneuver. For instance, the women’s clothes from the 1830s are not just a dress, it’s a whole process of undergarments, including a corset, extra petticoats and other foundation garments over which you wear the dress. Your hair has to be styled; accessories have to be added on; wearing bonnets in the sun — it’s a process. It really gives you a feel of what it was like living back then,” Rogers continued.

The costume-making program is relatively new to the Historic Site. They have a few costumes that have been there for a long time, but they are producing new ones. Some of the past costumes were made with Velcro or zippers, which didn’t exist until the early 20th century, so Rogers and the rest of the workers at the Historic Site are replacing with them with clothing more authentic to the time period.

Depending on the complexity, it can take anywhere from three days to a couple of weeks to make one costume.

“If you’re starting from scratch, you have to make all the undergarments for the women’s outfit, which can take longer,” Rogers said. “I can probably machine sew and hand-finish a dress within three or four days, but if I’m doing all the garments that go with it, it could take a couple of weeks. Mind you, we squeeze in the sewing time in between our regular work, so sometimes it could take months before a dress gets done.”

Many things have changed in light of the COVID-19 health crisis, and that includes the high-school sports recruiting process. There... read more