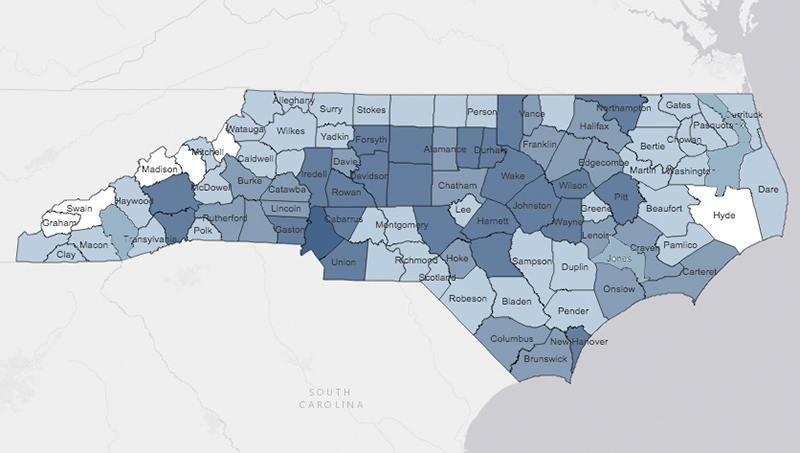 The number of confirmed COVID-19 cases in North Carolina continued to rise from 7,119 Tuesday to 7,261 on Wednesday. There have been 253 deaths in the state attributed to the virus, an increase of 14 overnight. There are currently 434 COVID-19 associated hospitalizations. According to Beaufort County Health Department Director Jim Madson, four of those hospitalizations have been Beaufort County COVID-19 cases.

The number of confirmed cases in the U.S. rose from 814,587 on Tuesday to 839,836 on Wednesday; these numbers include the 77,018 people in the U.S. known to have recovered from COVID-19. The U.S. has the greatest number of cases worldwide, and there are likely many more cases as those exhibiting symptoms are now being encouraged to stay home rather than get tested. Nationwide, 46,079 deaths have been attributed to the virus, an increase of 2,283 overnight.

Of Beaufort County’s total of 17 cases, contact tracing of these known, confirmed cases has concluded:

Wayne County cases rose dramatically over the weekend, as more than 330 inmates and 13 staff members tested positive for COVID-19 in the Neuse Correctional Institute in Goldsboro.

There have been 207 tests completed in Beaufort County as of Tuesday, with 186 negatives, 13 positives and eight pending. These are cumulative numbers and include tests performed at the health department and reporting private medical facilities through the county. Three of Beaufort County’s positive cases were tested in other counties.

Cases in North Carolina were projected to peak on April 17.

“The Governor’s Office has announced that it will be announcing our state’s plan for lifting current restrictions by the end of the week. We will continue to pass along this information as it becomes available,” the update reads.