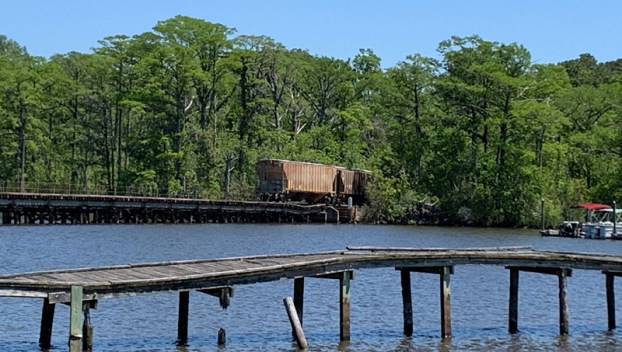 A train crossing the railroad trestle spanning Runyon Creek stopped in its tracks Wednesday, after a section of the trestle apparently started buckle under the weight of the train.

Railroad workers on scene Wednesday afternoon were able to safely remove the train from the damaged trestle. Carolina Coastal Railway leases the trestle and tracks in the area from Norfolk Southern, including the large trestle spanning the Pamlico River.

The train appears to have been traveling south on the line before it came to a stop. Three cars and the locomotive were sitting on the trestle, with an unknown number of cars following behind on the Washington Park side of Runyon Creek.

Early Wednesday afternoon, the locomotive and the cars in front of the one sitting on the stretch of damaged trestle had been disconnected and moved to the Washington side of the creek. The car resting on the damaged bridge was removed later in the afternoon. 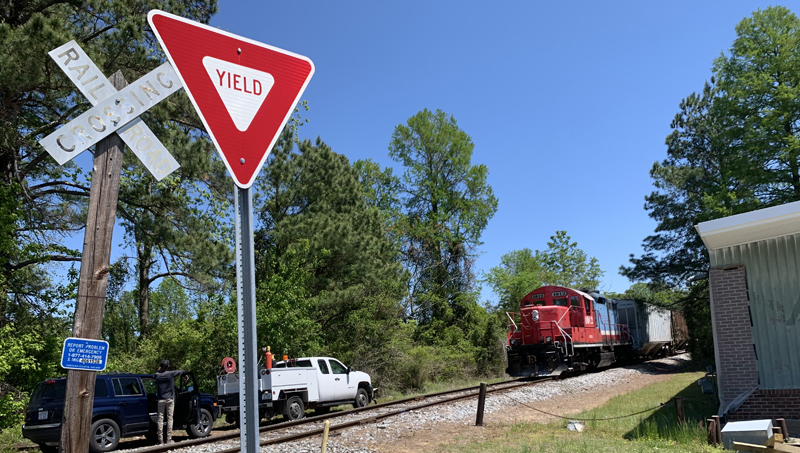 UNCOUPLED: As of early Wednesday afternoon, railroad workers had safely moved the train’s locomotive and cars behind to the Washington side of Runyon Creek. (Erica Lundberg)

In March, local resident Capt. Galen Swain brought up the issue of trestle safety during the monthly meeting of the Beaufort County Board of Commissioners, specifically in regards to the larger trestle across the Pamlico. He encouraged commissioners to initiate a dialogue with the railroad company to look at a replacing the trestle. He also raised concerns that if a train were to fall from the trestle, it could contaminate the Pamlico River and local water supplies.

“The trestle, if you’ve ever been under it in a johnboat when the train goes over it, it is absolutely terrifying,” Swain said. “That thing was rotten 30 years ago. … That’s something that’s been bothering me a long time. It really does need to be looked at. When the tide’s out, it’s rotten under the water.” 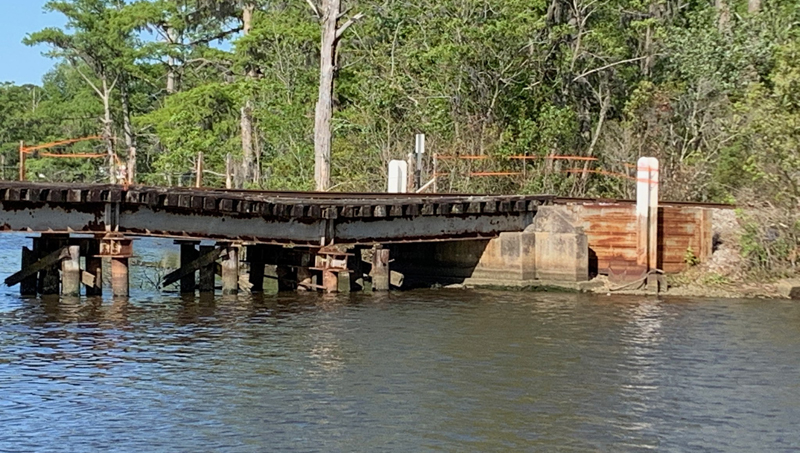 CAUTION: Orange caution tape spans the railroad tracks on either side of the damaged trestle. (Liane Harsh)

Under federal law, railroad trestles must be inspected at least once every calendar year, with no more than 540 days between successive inspections. According to a representative from the Federal Railroad Administration, only a “duly elected or appointed official of a state or political subdivision of a state, acting in his or her official capacity, may file a request” for those records.

Carolina Coastal Railway operates on 179 miles of track, running from Plymouth to Raleigh. Coastal Carolina Railway declined to offer comment on the incident. Local photographer Ric Carter captured a video of the efforts to remove the train from the damaged trestle, which can be viewed here.

For years, Carol Mann has shared the gift of watercolor painting with her students. Now her students are returning that... read more