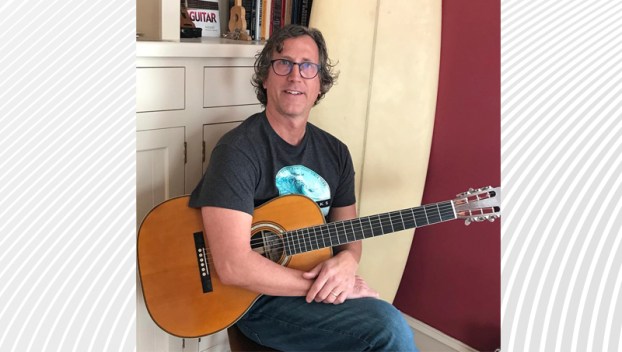 Music is an outlet for many — whether listening to music while driving, working out or walking down Washington’s waterfront, it can be an enjoyable escape from daily life.

“I had done one before at my home on my front porch when everything first started,” Reynolds said. “Just a few neighbors were listening from their porches from across the street and wherever they could hear from. The comments that I got afterward were, you know, telling me how meaningful it was. I didn’t realize the impact, but it meant a lot to some people.”

Not long after, Russ Chesson at the Estuarium contacted Reynolds about the possibility of playing there.

“Russ contacted me from the Estuarium and asked me if I’d be willing to come play music off of their back deck so people could hear while they were walking by. It was a similar idea, just to a larger audience,” Reynolds said. “It seemed to work out great. I got a lot of good feedback. People really appreciated it and told me it was a blessing during these times.”

Reynolds said it was special to see people so surprised by his performance last Wednesday.

“I think that because people don’t want people to gather, there wasn’t much publicity. It was really special when people just came across it. That’s something they hadn’t planned on. I think it was huge for people that were walking along the boardwalk and brought a sort of special joy to them because it was unexpected,” Reynolds said.

Back in 2012, Reynolds began the “Dave Reynolds Project,” which entails many different outlets of Reynolds’ work. His website contains live performances, recordings, educational programming and writing.

“I have some blogs on there that I write. There are book reviews and personal perspective pieces, and I’ve got quite a bit of original music as well as a couple of programs that I’ve been developing,” Reynolds explained. “One is called, ‘Amazing Guitars Friday,’ which is something I film and put on YouTube. The other is ‘Amazing Guitars, Renaissance to Rock,’ which is something I talk about in some videos, but it’s also a live performance that I’ve done a couple times, showcasing instruments and music. It focuses on the guitar, specifically, from the renaissance to the current time period.”

Reynolds is open to another one-man-show in the future, but doesn’t have a set date or location as of yet.

Why the fall sports season is so important for high schools

Dialogue about how to handle a fall sports season has ignited in recent weeks. Some states’ schools have already canceled... read more