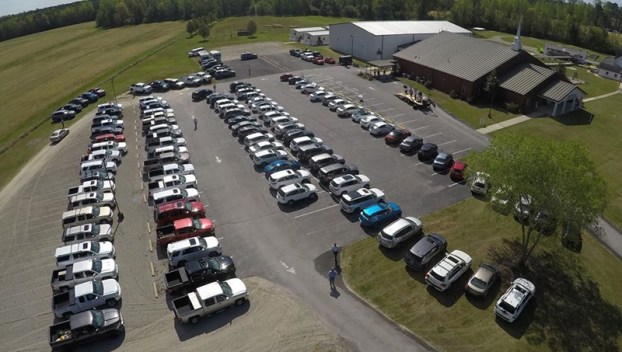 CONGREGATION: A view from above of Haw Branch Church of Christ’s parking lot during the drive-in service on Easter Sunday morning. (submitted by Jason Kirkman)

At Washington Assembly of God, it’s been more than two months since the congregation met for services in the sanctuary. Instead, they have joined in worship through other means such as online and drive-in services. But this weekend, the doors of the church will open again, with added precautions.

“Based off of our square footage, we can operate at less than 50% capacity and still handle what we would normally have on a Sunday morning,” said Washington Assembly pastor Daniel Haskett.

Haskett says the church will block off every other row of seating, encourage families to sit together, have ushers hold open the doors and implement rigorous cleaning in common areas such as restrooms. In planning to reopen, he says he’s been basing his church’s precautions on the same regulations in place for large retail businesses. For those who aren’t yet comfortable returning to the sanctuary, the church will continue its longstanding practice of livestreaming its services online.

“We’re trying to do as much as possible to go back to having service, but still being smart to keep people safe in the midst of everything,” Haskett said. “We need community, we need friends and we need to see people. But even then, it will be different, because we’re asking people not to hug and shake hands. But, at least, it’s a step back in that right direction.”

The injunction, handed down in U.S. District Court this weekend, came in response to a lawsuit filed in federal court last week by the religious nonprofit Return America, a Winston-Salem pastor and two North Carolina Churches. In the suit, the plaintiff argued that Cooper’s executive orders violated their First Amendment rights to freely exercise their religion, and Denver agreed.

“(Cooper), any of his agents, employees, and state or local law enforcement officers are enjoined from taking any enforcement action against plaintiffs or any other worshipers pursuant to the assembly for religious worship provisions in EO 138,” Denver ruled. “As set forth in EO 138, any person or group of people gathering to worship should observe the ‘Recommendations to Promote Social Distancing and Reduce Transmissions’ to the extent practicable.”

“This court does not doubt that the Governor is acting in good faith to lessen the spread of COVID-19 and to protect North Carolinians,” Denver added. “But restrictions inexplicably applied to one group and exempted from another do little to further these goals and do much to burden religious freedom. Moreover, it does not make a difference that faith-based bigotry did not motivate EO 138. The Constitution makes the bar higher than that. The constitutional benchmark is governmental neutrality, not governmental avoidance of bigotry. A law is not neutral and generally applicable unless there is neutrality between religion and non-religion.”

Ford Porter, Cooper’s spokesperson, responded to the court’s ruling this weekend, saying the governor’s office will not appeal the decision.

“We don’t want indoor meetings to become hotspots for the virus and our health experts continue to warn that large groups sitting together inside for long periods of time are much more likely to cause the spread of COVID-19,” Porter wrote. “While our office disagrees with the decision, we will not appeal, but instead urge houses of worship and their leaders to voluntarily follow public health guidance to keep their members safe.”

The injunction remains in place for 14 days, and a hearing on the motion is scheduled for May 29. Cooper is expected to share additional information about entering Phase II of a statewide reopening plan this week.

BELHAVEN — After one of the most successful seasons in Pungo Christian Academy basketball’s recent history, Mart Benson stepped down... read more