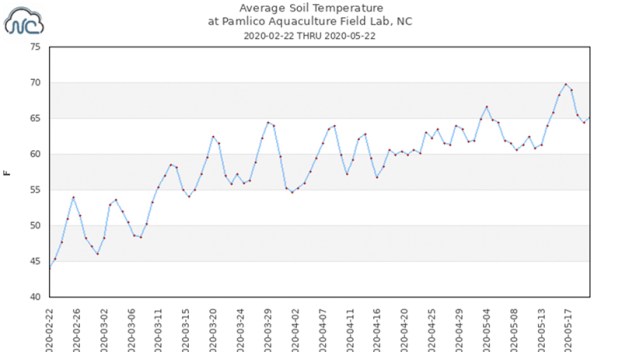 DEGREES DOWN: Soil temperature and two late-season frosts may be impacting grass this spring. Soil temperatures have dropped again with this week’s rain. (State Climate Office of North Carolina)

What’s wrong with my yard?

This has been the topic of the week this week! I have had more calls, from homeowners and landscapers alike, about lawns this week than in the past month. So what is going on?

Let’s talk about warm-season grasses first, these include Bermuda, St. Augustine, centipede, and zoysia grass. What do warm-season grasses need to thrive? The No. 1 thing they need is sunlight; next to sunlight is warm soil. I used the State Climate Office of North Carolina to pull some data this week and take a good look at soil temperatures since Feb. 1. I found that until this past weekend, soil temperatures had remained in the 55 to 65 degree range since mid-March. One station reported soil temperatures in the low 70s and the other in our area barely reaching 70 degrees before going back down with this most recent rain. We need some warm days and nights for our grasses to continue through green-up. Right now, we are still considered in the green-up stage. Most years, we have been through green-up in early- to mid-May, but not this year. After beginning as the quickest spring on record, we find ourselves like an old jalopy … stalled out.

Yet another factor we have had to contend with in our area are the effects of several late-season frosts. There is a reason why research-based information tells us not to begin fertilizing until June on many warm-season grasses. In eastern North Carolina, our weather is a lot like Forrest Gump’s box of chocolate — you never know what you’re going to get! Many across the area had patchy frost on two occasions in May. This is not the best for warm-season grasses. Typically, it would just burn the edges of the grass, then we would see a quick rebound with warmer temperatures. The problem for us this season is we haven’t had those warmer temperatures on a consistent basis for the grass to recover.

I know we have all been on quarantine since early March and itching to get outside and do something — me included! I have had more calls this year than ever about how to fertilize lawns. This was even worse due to the partial shutdown of the North Carolina Department of Agriculture and Consumer Services’ Agronomic Lab that processes soil samples. Many folks wanted a “rule of thumb” for their yard and to get it out early. This may have caused damage to our lawns in the long run. My suggestion is to get your soil sample into the lab now. Once your report is released, do what is recommended to keep your soil pH in check and then spoon-feed nitrogen-only fertilizer to your problem areas: 1/4 of nitrogen (N) per 1,000 square feet, every two weeks. To estimate 1,000 square feet, think of two semi-truck trailers parked side by side. To estimate the amount of N you need from your package, look at the first number in the analysis, something like 21-0-0. The 21 is the percentage of N in the package. If you have a 10-pound package of 21-0-0, you have 2.1 pounds of N. To apply a 1/4 pound of N to a 1,000-square-foot area, you need 1 pound of this product. Again, the recommendation for centipede is 0.5 – 1.0 pound per 1,000 square feet, per year, applied after June 1.

In addition to these issues, I have seen large patch running wild this year. This is a fungal pathogen that plagues warm-season grasses in the spring. It often can be seen on St. Augustine in the fall but is notorious for causing green-up issues in centipede. The problem with large patch is that it often goes undetected in the spring until finally noticed after all the other grass around the infected area has significantly greened up. These areas can be treated with a fungicide containing azoxystrobin (most of these products require a pesticide license) but not until soil temperatures go back down in the fall. The recommendation is to treat when soil temperatures are back in the 65-degree range for a few days. If large patch is caught in the spring before soil temperatures go above the 70-degree mark, some efficacy has been shown. However, at this stage of the game, it would really be a waste of effort and money to spray now. Using the spoon-feeding approach to help those areas recover is a much better plan for now. However, too much of a good thing is just that: overfeeding the lawn, especially centipede, in affected areas will cause the problem to be much worse in subsequent years.

So, how do you tell the difference between cold damage and large patch? It is all in the scope and shape of damage. Look at the shape of the damage and where the damage is located. Large patch will have an almost perfect circular shape. Cold damage will be irregular in shape. Often cold damage will not be seen under trees or on certain sides of the structures. If you see damage that occurs in straight lines, think about what has been applied to the yard this season.

Why and how we celebrate Memorial Day