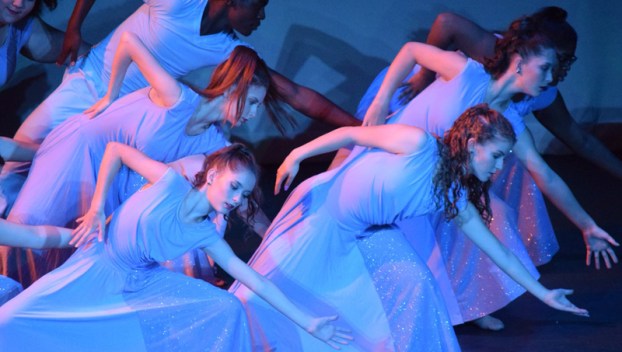 EMPTY STAGE: In addition to ceasing in-person classes, Le Moulin Rouge de Danse has also canceled this year’s summer recital at the Turnage Theatre, due to statewide restrictions in place to slow the spread of COVID-19. The studio is one of many businesses that cannot reopen before June 26. (Le Moulin Rouge de Danse)

Shannon Reising was ready for Phase II. She had a plan in place to reopen her dance studio, Le Moulin Rouge de Danse, this week — complete with masks, hand sanitizer, social distancing protocols, a new cleaning schedule. But when the updated restrictions for Phase II were announced last week, requiring her business and others to remain closed, the news came as an unpleasant surprise.

Since the studio closed in March, teachers and students have been able to continue instruction online. But now, it seems they won’t meet in person again until June 26, rendering all the studio’s reopening preparations null and void.

“Our plan rivaled what the restaurants are doing, because I understand I’m working with children.” Reising said. “Even though the CDC says we could operate like a gym, we wanted to go above and beyond. We had a plan to take the DHHS preparation class and get the studio certified twice in both categories, we had gallons of hand sanitizer and disinfectant, we had a new cleaning schedule.”

In announcing the updated Phase II restrictions last week, North Carolina Gov. Roy Cooper said businesses such as dance studios, gyms, bars and entertainment venues might contribute to the spread of COVID-19, because in all of those places, groups of people can be in close contact for prolonged periods of time.

With the floor space she has in the big red barn that houses her dance studio, however, Reising says there’s rarely a time when the building is at 50% capacity, the standard set for retail businesses and restaurants throughout the state. Because students aren’t receiving in-person instruction, the studio reduced tuition by half.

“In March, April and most of May, we were operating at 18.5% revenue, just enough to cover the lights, the internet, the gas and utilities,” Reising said. “My teachers are independent contractors. Out of the goodness of their hearts, they taught for free all of those months.”

Aside from the financial impact of closing the studio’s doors, the studio has also had to cancel its annual recital at the Turnage Theatre. Once again, Reising had already put considerable planning and money into making that happen, only to have to break the sad news to her dancers last week.

The plan was for the show to run at 50% capacity for four days. She had already put down the deposit with Arts of the Pamlico for those dates, and had even purchased disposable seat covers as an added safety measure. Those precautions set her business back $1,000, about a tenth of what it normally costs to put on the show.

“We spend about $10,000 a year on this show, because we really think it’s great exposure for the community of the arts and the kids especially,” Reising said. “It’s something they really look forward to. Will (Reising), the staff and I do everything we can to make it the biggest, best, razzle-dazzle show you can get in Beaufort County.”

Like other business owners who have had to stay closed, Reising believes she and her staff are capable of maintaining a safe environment. While Reising’s studio welcomes people from all political backgrounds, and she describes herself as mostly non-political, she argues that the continued closure of dance studios and other artistic venues does raise Constitutional issues.

For the latest updates on Moulin Rouge De Danse, visit www.theredbarnofdance.com, or find them on Facebook @LeMoulinRougeDeDanse.

Washington to host 252 versus 919 Winter Classic

Some of the best high school basketball teams within the 252 and 919 area codes, will travel to Washington High... read more