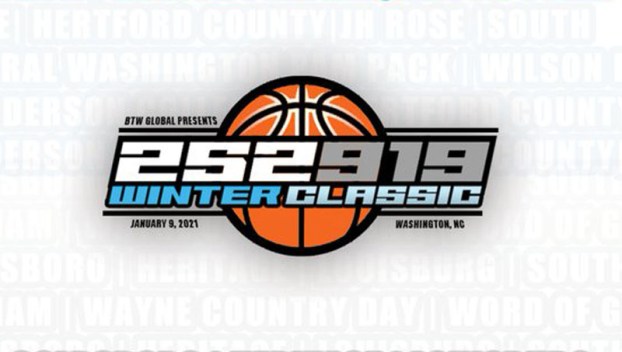 LOGO: The 252 vs. 919 Winter Classic logo displays the date and the schools that will attend the Jan. 9 event inside Washington’s David W. Smith Gymnasium. Moving forward, the inaugural event will try to include the best teams from the respective area codes each year. (Anthony Bruton)

Washington to host 252 versus 919 Winter Classic

Some of the best high school basketball teams within the 252 and 919 area codes, will travel to Washington High School on Jan. 9 for a one-day basketball event that will decide which area code takes home bragging rights.

The 252 versus 919 BTW Global Winter Classic will host 12 teams, six from each area code. Henderson Collegiate, Hertford County, J.H. Rose, South Central, Wilson Prep, Goldsboro, Heritage, Louisburg, Southern Durham, Wayne Country Day, Word of God and the hometown Pam Pack will all play in the showcase. Matchups are to be announced at a later date.

Allewalt teamed up with Anthony Bruton, the founder of bucketreel.com, to attend the event. Bucketreel.com will assign videographers to broadcast the games on Facebook Live and Youtube. Bruton is a graduate of Kinston High School, and he went on to play basketball collegiately at Lenoir Community College and St. Andrews University.

Bruton and Allewalt’s friendship extends from Allewalt’s time at Ocracoke, where he put on a few weekend tournaments that ran smoothly, according to Bruton.

“A lot of teams in smaller areas have a really hard time getting good teams to come play them. We just kept talking and said, ‘Why don’t we just do it? How about we get some teams from the 919 down here and just play?” Bruton said. “We started talking about this around a year ago, and everything has just kind of lined up perfectly. It’s just for the exposure of kids in the 252 area code, and at the same time, some exposure to the good folks in the 919 that are willing to come down and give some guys in eastern North Carolina a shot.”

Allewalt was fired up about the event becoming public, as well.

“The event itself is going to be really, really neat. I’m excited for it because it has been an ongoing debate on social media: who has the better basketball teams or players, the 252 or 919?” Allewalt said. “Washington has a rich history in basketball that the younger age folks may not be aware of. The Pam Pack were just as good a basketball program you’d find anywhere in the ’70s and ’80s. To be able to bring a high level of competition to our gym is really super exciting. It also helps our basketball program with some recognition.”

The showcase will host six games in one day, with the Pam Pack rounding out the evening with a scheduled 7:30 p.m. tip.

“We’re going to have hospitality rooms for all the coaches, media, athletic directors and a separate room for the referees, because we’ll need nine or 10 of them for the whole day,” Allewalt said. “This is an inaugural event — and our plans to grow and make this one of the best venues in eastern North Carolina — is going to be marked by some added dimensions as we move through the years.”

Few teams in North Carolina were as dominant on the diamond for the past four years as Washington’s Lady Pam... read more