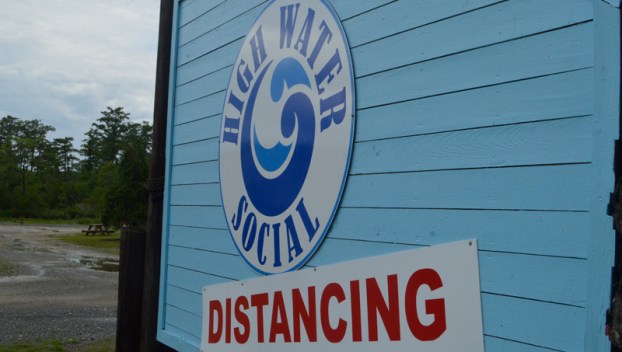 SOCIAL (DISTANCING): A sign outside Highwater Social in Chocowinity plays off of the club’s name, adding the word “distancing” to the title. Across the river in Washington, Market Street Pub reopened its doors this weekend, as legislation and litigation challenged the closure of such businesses. (Matt Debnam/Daily News)

The beer, wine and liquor are flowing again this weekend at one local bar after a week of legislation and threats of litigation challenging North Carolina Gov. Roy Cooper’s Executive Order 141. That order keeps bars and clubs shut down during Phase II of the state’s three-phase reopening.

Connie Langley, who owns Market Street Pub in Washington, decided this week to take a chance on opening her business after being closed for more than two months. With a capacity of 120 people, she’s limiting entry to 30 people and is putting a variety of safety precautions in place, including serving drinks in disposable cups, encouraging people to gather outdoors and frequent cleaning.

“Beaufort County wants to get its business back up and running, with the few number of cases we have here, I don’t foresee it being a problem,” Langley said. “I’m praying for a good result. People at the beach are doing it, people in New Bern are doing it, and it’s time for Beaufort County to do it too. I don’t want to be the only business that can’t open, and I’m willing to do whatever I’ve got to do to open.”

If all goes well Friday, Langley said she will keep the bar open moving forward.

This week, the North Carolina General Assembly passed H.B. 536, a piece of legislation that would allow bars and private clubs to reopen during Phase II, with reduced capacity and additional safety protocols. While the bill garnered bipartisan support in the Senate, less so in the House, Cooper said there will be a time to open bars, but “that time is not now.”

“We’re six days into Phase II,” Cooper said Thursday. “On a day when we’re seeing some of our highest numbers of hospitalizations and deaths, the Senate wants to open bars. These decisions are difficult, but they’re made with daily briefings from doctors and health care experts. This legislation would mean that, even if there’s a surge of COVID-19 that overwhelms our hospitals, bars still stay open.”

Cooper did not say whether or not he would veto the bill, and a decision had not been announced as of press time Friday. The bill passed the Senate by a vote of 42-5 Thursday and the House concurred in a vote of 65-53. Both local N.C. Rep. Keith Kidwell and N.C. Sen. Erica Smith voted in favor of the bill.

Adding to the legal challenges against Executive Order 141, a group called the North Carolina Bar and Tavern Association announced its intention to file a lawsuit against Cooper this week on behalf of 100 bar owners across the state.

“It makes no sense to say it’s safe to have a drink in a distillery or a beer in a brewery, neither of which serve food, but it’s somehow unsafe to enjoy that same cocktail or beer in a bar,” said Zack Medford, president of the NCBATA. “We aren’t asking for special treatment — we are asking to enjoy our constitutional right to enjoy the fruits of our labor and for equal treatment. We want to get back to work just like everyone else. The safety of our guests, our employees and our community is absolutely paramount to us. We’re willing and eager to abide by the rules when we are open.”

Attorney Mike Tadych, of the Raleigh firm, Stevens Martin Vaughn & Tadych is representing the NCBATA and planned to file its lawsuit against Cooper’s office Friday if an alternative resolution was not reached.