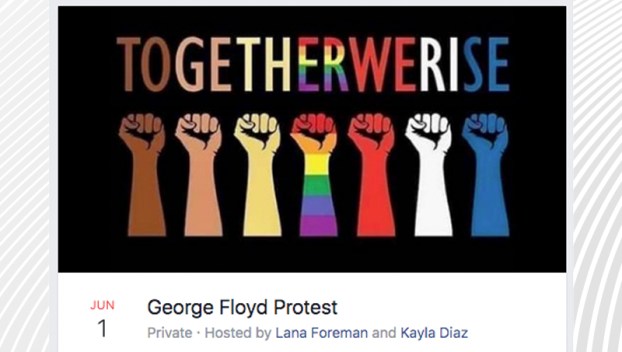 A week after the death of Minnesota resident George Floyd, protests decrying police brutality have swept the country, moving ever closer to Beaufort County. Now, a protest on the Washington waterfront is scheduled for 5:30 p.m. Monday afternoon.

“We just want it to be peaceful,” said Kayla Diaz, one of the organizers. “I know that’s a lot to ask for with everything going on. We are not here to cause a ruckus. We just want to be seen and heard.”

As of Monday morning, a Facebook event for the protest had positive RSVPs from 25 people, maybes from another 25 and more than 1,000 people invited. In the event description, organizers stressed that the desire to maintain peace during Monday’s rally.

“We want to have a peaceful protest for George Floyd and to speak up against racism and police brutality,” the description reads. “We don’t want to riot or vandalize anything. Families use the waterfront, so let’s be mature for their kids’ sake. We have all lost someone or know someone who has lost someone to police brutality, but we need to stay focused and remind ourselves why we are doing this. We need to put our feelings aside and be the change we want to see in the world, peacefully. Bring a sign, with no sticks, just poster board signs. Wear red if you can, so we know who you are. Remember that, sometimes, peaceful protests can be met with police brutality, so know the risks. We will be respectful. We will be powerful. We will be heard.”

According to a post from Lana Foreman, one of the other organizers, the plan is for the protest to meet near the waterfront lighthouse and then march down the boardwalk. At Festival Park, the group will lay down for eight minutes, representing the amount of time George Floyd was on the ground with Minneapolis police officer Derek Chauvin’s knee on his throat. Finally, the group will have a time of prayer and offer up the names of the people who have been lost to police brutality.

Washington Police Chief Stacy Drakeford said his department was making preparations for the protest Monday. WPD officers, along with personnel from the Beaufort County Sheriff’s Office and other agencies, will be on scene to both protect the protesters’ First Amendment rights and ensure that the protest remains peaceful.

“Our job, first and foremost, is to protect the citizens of this community,” Drakeford said. “The second part of that is to protect their property. In that, it’s my job to make sure nobody’s First Amendment rights are violated. It’s definitely a balancing act. We understand that everybody has the right to protest, but nobody has the right to cause mayhem and destruction in the city.”

Drakeford said he planned to reach out to the protest organizers Monday to make sure that there was an understanding between those demonstrating and law enforcement. The WPD, the Washington-Beaufort County Chamber of Commerce and the Washington Harbor District Alliance have been working with business owners to make sure their property is protected.

Sunday night, the WPD monitored a small protest in the area of Ninth Street Sunday night. That group of protesters marched peacefully for about six blocks before disbanding, Drakeford said. Speaking of the root cause of the protests, Drakeford echoed other law enforcement officers in condemning Floyd’s death in Minneapolis.

“I denounce everything that officer did in Minnesota,” Drakeford said. “When we’re right, we’re right, and when we’re wrong, we need to go after it vigorously. We’re praying that if this event does occur tonight, that it is a peaceful event so people can get their feelings off their chests without causing any major issues.”

In Raleigh and Greenville, peaceful rallies of citizens exercising their First Amendment rights in the name of justice have been overshadowed by vandalism and violence that followed afterwards. On Saturday, what began as a peaceful rally in Raleigh devolved into a night of violence, fires and looting.

What followed was a scene of destruction in Uptown Greenville, as rioters broke glass at a number of businesses and Greenville City Hall. Holtzman said Monday there was no loss of life and only minor injuries during the protest. Two people were arrested, Holtzman said, one for failure to disperse and the other for carrying a firearm. A number of juveniles are also detained, and further charges are anticipated.

Data, science should be key drivers in re-opening economy

The number of positive cases of COVID-19 in eastern North Carolina continues to rise. Although we have successfully flattened the... read more