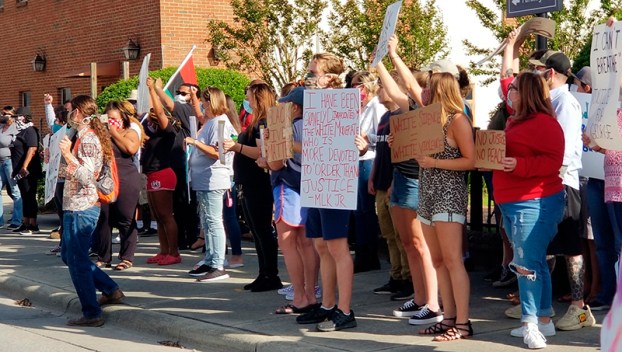 PEACEFUL PROTEST: Protesters on the Washington waterfront on Monday evening for the "Together We Rise" march. (Matt Debnam/Daily News)

As two separate marches protesting racial injustice and the killing of George Floyd last week by Minneapolis, Minnesota, police officers,  were set to convene on downtown Washington, local leaders were hoping for a peaceful outcome.

Two events were planned by separate organizers for roughly the same time Monday evening. The “Together We Rise” march originated from the west end of the Washington waterfront at 5:30 p.m. and made its way down Stewart Parkway to Harding Square. The “Black Unity Power Rally” was slated for Beebe Memorial Park, at 11th and Bridge streets, and the group was supposed to march down Market Street to downtown Washington, but protesters ended up arriving on the waterfront after the other group had left.

“The mayor and I met with law enforcement and city employees this morning to discuss management of the activities as described by organizers,” Washington City Councilman Donald Sadler said in response to the “Together We Rise” event. “These citizens have a right to a peaceful protest. We have every reason to believe that the vigil in support of the national call for justice in the death of George Floyd, will be a peaceful event in our community. I trust their actions will help to heal race relations. At the same time, I am saddened by the fact that these protests, peaceful or otherwise, are still necessary in the greatest country in the world.”

The marches prompted the city to ask all businesses to close down by 4 p.m. Monday and put a curfew in place between 8 p.m. Monday and 6 a.m. Tuesday morning. Several business owners were seen boarding up windows in downtown Washington ahead of the marches as a precaution, after peaceful protests in neighboring downtown Greenville led to broken windows and several arrests on Sunday night.

Officials urged Washington marchers not to do the same; no damage was done during the march.

“Be peaceful, that’s all I would say. I respect their right to protest, but I don’t condone violence in any form,” Beaufort County Commissioner Ed Booth said before the event. “And I hope and pray that we don’t see hatred or anything else that would cause disruptions to our community.”

Where last week, COVID-19 was the focus of national attention; this week, Floyd’s death and the nationwide protests have dominated conversation. Booth said the combination of watching Floyd’s killing at the hands of police officers and the violence in response are “fueling each other.”

On Monday morning, Rev. Aaron Lewis, pastor at Spring Garden Missionary Baptist Church and president of the Beaufort County NAACP, sat down to write a sermon. The topic: how people have responded to Floyd’s death and how they cope with the hurt they are feeling. Lewis said he believes finding an outlet for that hurt, and starting a dialogue is key to solving the problem and preventing the violence and vandalism that has spread throughout the country.

“I also realize, looking at the different news stations, that not everybody is being violent,” Lewis said. “There are some who are really just trying to express themselves peacefully. Then I also realize there are some other folks who are aggravating the situation and doing things that they should not be doing. They’re getting caught up with, and being confused with, people who are trying to do things peaceably.”

Speaking of those who are resorting to destruction, Lewis says those actions distract from the point of the peaceful demonstrations.

At nearly 80 years old, Washington City Councilman Richard Brooks, who’s served the city for 17 years, remembers well the Civil Rights marches of the 1960s, but for him, the destruction seen at some protests is not acceptable.

“My thoughts on it is that two wrongs don’t make a right,” Brooks said. “It was wrong for that man beg for his life and they didn’t help him, and it’s wrong to burn our people’s livelihoods that didn’t have anything to do with it.”

Brooks said the national conversation hinges on trust: without it, people can’t work together to resolve the issue of racial injustice. But he said he’s hoping for a positive outcome.

“I think the leadership will come to grips with it, and I believe they’ll do what’s right because they see that people are hurting,” Brooks said. “Any man who saw (Floyd’s death) on TV can’t help but thinking, ‘What if that was my son? What if that was my daughter?’

We, as Americans, are better than that.”

Booth said dialogue is the key.

“We’ve got to change things, and I hope we can sit down and talk about our problems,” he said. “They’re better days ahead. We’ve just got to stop hating people.”

In addition to coordinating a unified response with the state NAACP, Lewis is also reaching out to local pastors to initiate a dialogue about the circumstances the country now faces. He hopes that conversation will bring together local pastors of all denominations and races.

“I’ve opened it up to anybody and everybody,” Lewis said. “I’d be willing to open up the sanctuary if we need to, with social distancing, and discuss how we can bring people together.”

Local pastors interested in participating in that dialogue can reach Lewis at 252-944-3940 or by email at pal.sgmbc@gmail.com.

A second protest has been scheduled in Washington for Monday night. An event on Facebook titled “Black Unity Power Rally”... read more