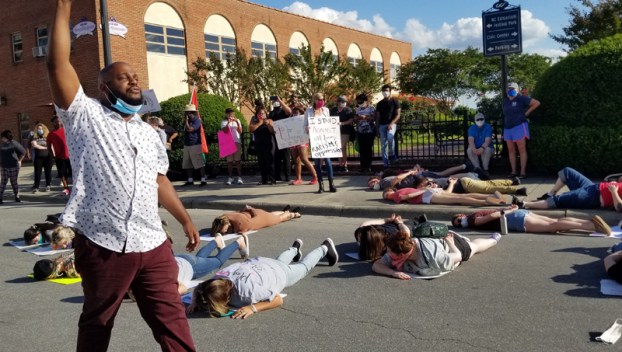 STANDING UP, LAYING DOWN: Protest leader Raheem Shelton leads a crowd in chants, as demonstrators lay on Stewart Parkway to send a message against police brutality. (Matt Debnam/Daily News)

Peace and a message prevail at waterfront protest

A protest against police brutality in the name of slain Minnesota resident George Floyd sent a strong message Monday afternoon in Washington, and was notably free of violence and vandalism that followed demonstrations in other parts of the state.

About 125 people joined in the rally, marching from the lighthouse on Stewart Parkway to Market Street, where protesters laid down on the pavement in front of a line of police officers. In their signs, and chants of “No justice, no peace,” and “I can’t breathe,” the message was clear — the unjustified killings of unarmed black men and women must end.

“This is what needed to happen,” said Raheem Shelton, who marched at the head of the protest. “I feel like this is the start of something new, a new system. It’s the start of things changing. Cops need to take more responsibility for their actions and not stereotype us as black men. We, as black men, have targets on our backs every single day. I’m here to make my voice known and to help stop the spread of injustice.” 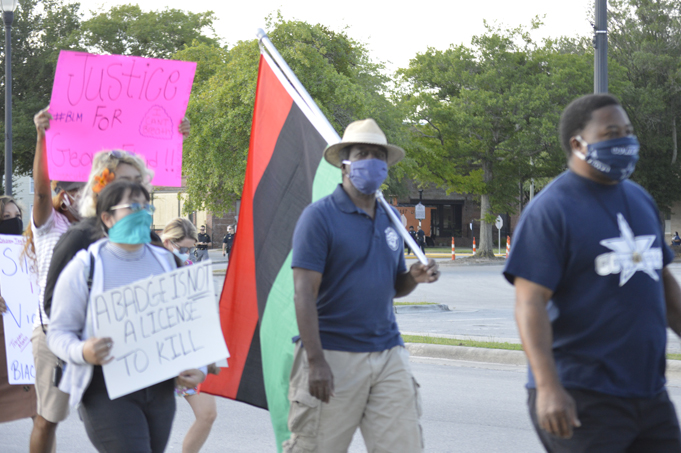 Marching alongside him was N.C. House District 79 candidate Nick Blount, who also spoke during the protest. Blount called the march “productive,” but said that there was still much work left unfinished in the fight to end police brutality.

Also among the protesters, Bill Booth is no stranger to fighting racial injustice. Past president of the Beaufort County NAACP, Booth carried a black, green and red Pan-African flag, and said demonstrations like Monday’s are key to furthering the conversation.

“It’s time that we all, as a community, come together and address the problem,” Booth said. “Unless we do it collectively, it won’t happen. It isn’t a black thing or a white thing, it’s a people thing. I can see my kids, my fiends kids, I could see me in the predicament George was in.”

At the end of the protest, leaders emphasized that the most effective way to bring about change is not through violence, but by making one’s voice heard in elections. As people prepared to leave the protest, organizers handed out voter registration forms to empower people to do just that. 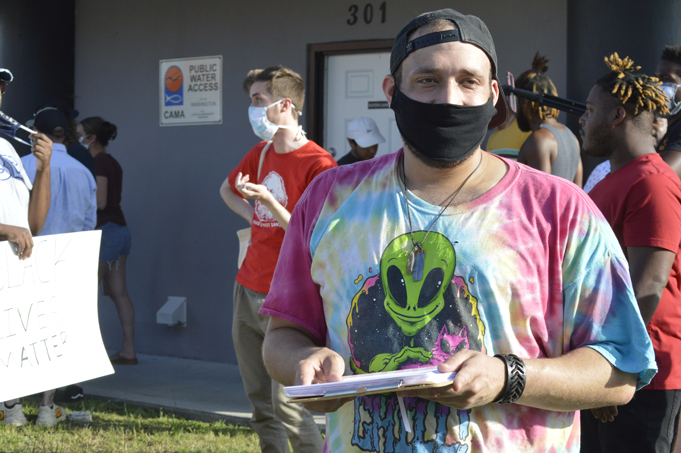 While the waterfront protest disbanded soon after a closing word or prayer, a second protest gathered afterwards. That demonstration was originally going to take place at Beebe Memorial Park.

From the perspective of law enforcement, Washington Police and Fire Services Director Stacy Drakeford said that he “couldn’t ask for anything better” than what happened on the waterfront Monday afternoon. Boarded up shops downtown went untouched, there was no violence and protesters were able to exercise their First Amendment Rights.

Washington Police Department officers, along with Beaufort County Sheriff’s Office deputies, were stationed at each intersection from Gladden Street to Bonner Street, keeping a watchful eye on the protest. Deputies were also posted outside of the Beaufort County Court House. During the entire demonstration, however, there were no conflicts between officers and protesters. 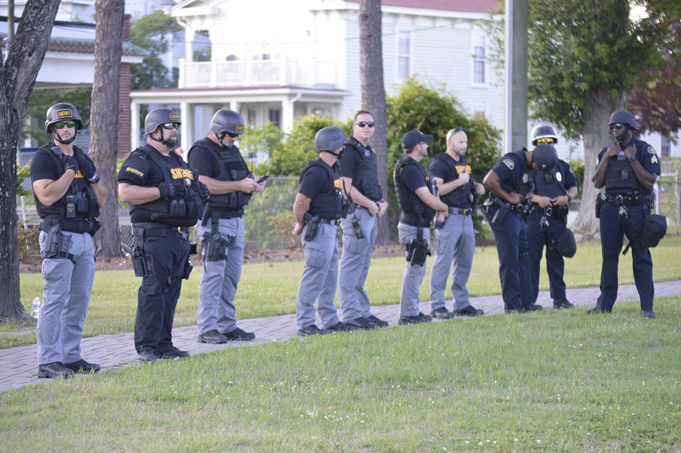 WATCHFUL EYE: Washington Police Department officers and Beaufort County Sheriff’s Office deputies were on hand to both protect protesters’ First Amendment rights and to ensure the demonstration remained peaceful. There were no conflict between protesters and law enforcement. (Matt Debnam/Daily News)

That’s a sentiment shared by Shelton and others who protested.

“This protest needed to be peaceful,” Shelton said. “Doing stuff out of anger is not getting anybody anywhere. As long as we make our voice heard, that’s what matters. That’s what counts. It could have been anyone of us, any black man. It’s not just nationwide. It’s local too. I believe once we start to address the local problem, the nationwide problem will be fixed.”

Additional photos from Monday’s demonstration can be viewed here.

March for justice on the Washington waterfront

Chants of “I can’t breathe!” and “No justice, no peace” could be heard on the Washington waterfront as protesters gathered... read more