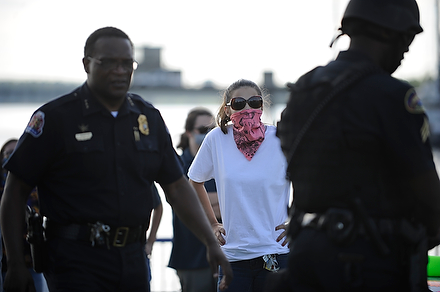 TIME FOR DIALOUGE: Washington Police and Fire Services Director Stacy Drakeford, pictured left, during protests on the Washington waterfront Monday, says he hopes to initiate a dialogue with local residents about some of the issues raised during the rally. (Ashley Vansant/Daily News)

After a peaceful rally against police brutality on the Washington Waterfront on Monday, a question lingers: where do we go from here? It’s a question local leaders will take a closer look at in Washington.

Washington City Manager Jonathan Russell, who watched as the protest moved down Stewart Parkway, said the city will follow how protests unfold elsewhere, as well as remain responsive to the concerns of residents.

“We’ll try to maintain order and safety for all the citizens in Washington and try to be as proactive as possible with allowing people to express their First Amendment rights,” Russell said Tuesday.

He added that the City has a few initiatives underway to help foster conversations moving forward. Part of that involves reaching out to the faith community to build stronger ties between the city and all of its residents. Another venue for fostering those conversations is the Washington Human Relations Council, a group whose mission is to promote social and economic equity in the community.

Florence Lodge, a long-serving member of that council, says she understands the anger of the protesters, but that the way to fix the problem is through meaningful conversations.

“It’s black and white folks upset about what happened to (George Floyd),” Lodge said. “Looting and fighting is not going to help at all. The man is dead. We have to have more respect to try and get things done right instead of acting up. I would really appreciate it if we all would come together. We have enough going through the virus. If you don’t know God, you don’t know what to do. I just wish we could all come together, because we are all one race.”

Washington Police and Fire Services Director Stacy Drakeford, who also serves as a member of the HRC, spoke of the need to open up dialogue after the protest. Overall, he said things remained calm throughout the night afterward.

“We’ll still be taking extra precautions,” Drakeford said Tuesday. “We have to deal with this and come up with some solution to solve the problem. If we can’t solve it, we have to make it better.”

As of Tuesday afternoon, city leaders were not aware of any additional protests being scheduled in Washington. A curfew that was in place Monday night expired at 6 a.m. Tuesday morning, and Drakeford said there were no plans to implement another.

The number of confirmed COVID-19 cases in North Carolina continued to rise from 29,399 on Monday to 30,023 Tuesday. There... read more