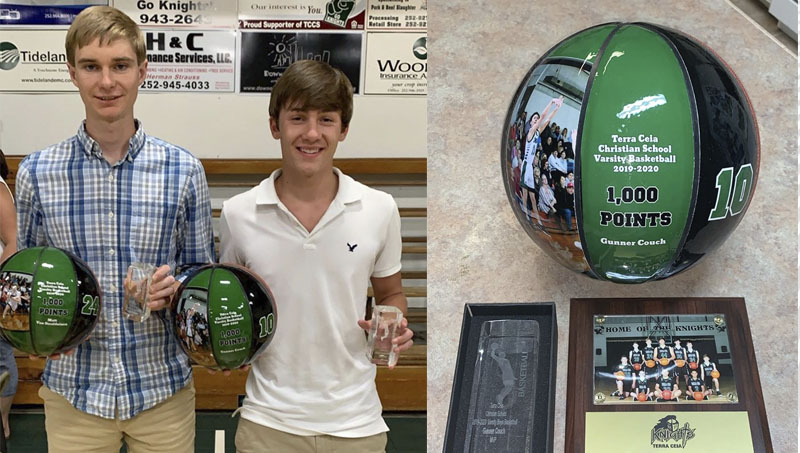 Van Staalduinen and Couch led the way to a second-round berth in the NCISAA state tournament, a 26-4 record with a 12-1 conference mark and an outright Tarheel Independent Conference Title.

Van Staalduinen scored his 1,000th point in the middle of last season during the Knights’ route of Bear Grass, and was recognized for the accomplishment in a home game against Coastal Carolina Home School.

“I was very excited when I found out,” Van Staalduinen said. “There are not many players — percentage wise — that achieve that accomplishment.”

“The ball was very nice. It is going to be a good reminder of my achievement for the rest of my life,” Van Staalduinen said. “(My plan) is to take what I have learned from my past seasons to make this season the best one yet.”

Couch was right on Van Staalduinen’s heels when it comes to points scored. Couch scored 606 points this season, with a season-high 39-point outburst against Albemarle School on January 10.

“I passed 1,000 points on Jan. 30 against Lawrence Academy. I was very excited about it when I got it, but I didn’t really give it too much thought until we got the balls,” Couch said. “The coaches didn’t notice until right before the game, so we didn’t get a ball until the athletic banquet. The 1,000-point ball looks sick in my opinion.”

As far as Couch’s plans for next year, he wants to help his team the best way he can.

“I want to average a double-double next year. I also want to do whatever it takes to help my team win and compete against every team. It would be nice to get a college offer, too.”

Both Van Staalduinen and Couch will be seniors next year, and look to add to their trophy cases.