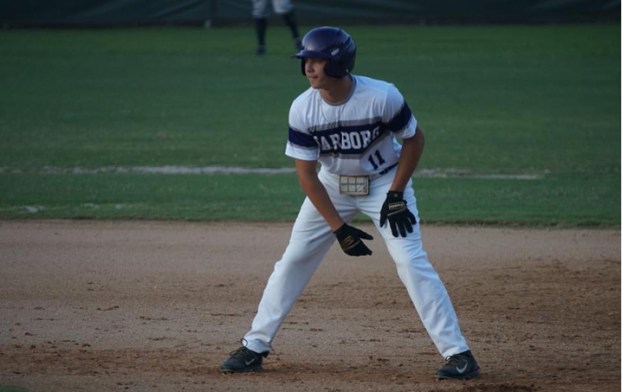 LEADING OFF: Southside graduate Brantley Cutler takes a few steps off the first base bag for the Tarboro River Bandits last week. Cutler is looking to fine tune his skills in preparation for his next season at Maryland Eastern Shore. (Tammy Cutler)

The River Bandits are a part of the Carolina–Virginia Collegiate League and began the league in an attempt a return to normalcy during the COVID-19 pandemic.

The Bandits are already sitting at 6-0 on the season, usually playing two seven-inning games as part of a double header.

According to Cutler, parents and media are allowed to attend, but they must abide by social-distancing guidelines. While Cutler, Barfield and Woolard didn’t get experience a full college season this spring, Cutler said he was happy to be reunited with some familiar faces.

“Me and these guys have been playing together since we were little kids. We are truly blessed to be able to have such a great team right here in Tarboro, close to home,” Cutler said. “All of these other guys are coming here from all over the country to play. It’s great to be able to play with old teammates because it gives the team more of an at-home-feel and makes it feel like I have been playing with the other guys forever.”

Cutler plays for the University of Maryland Eastern Shore Hawks, Woolard holds a spot on the North Carolina Wesleyan roster, and Barfield aims to walk-on to N.C. State’s baseball team this year.

“I was stoked when I heard that we would still be having a summer team with all of this madness going on. Most summer teams/leagues were canceled, so I was just so blessed to be able to be play this summer because every other kid in the country isn’t getting the same opportunity to play this great game this summer,” Cutler continued. “My main goal this summer is to learn about the power I’ve gained in the weight room. I dedicated myself to it and transformed from a beanpole to putting on 50 pounds. … I want to be the best player I can possibly be by the end of the summer. You’ll definitely see us in the championship in early August. Go Bandits!”

The Bandits are in the midst of about a 50-game schedule that will be topped off with a postseason tournament to be held in August at Tarboro’s Municipal Stadium, located beside Martin Millennium Academy. The Bandits have three double-header matchups this week and through the weekend against N.C. Fungo, the Edenton Steamers and Fuquay-Varina.