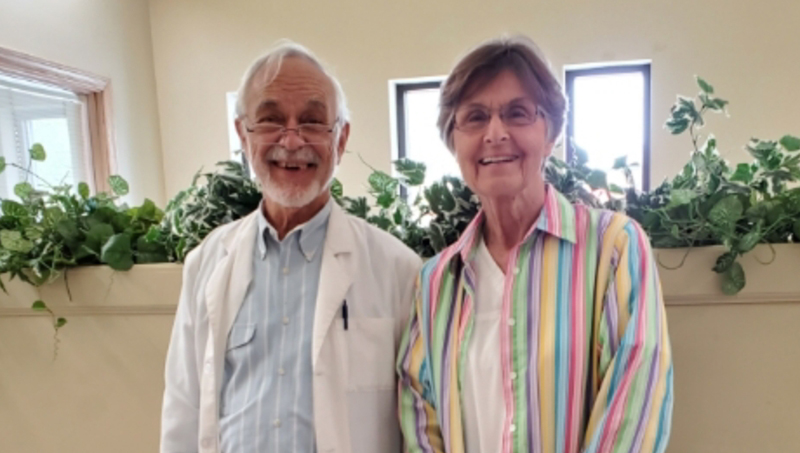 RETIREMENT CELEBRATION: Dr. Frank Sheldon, who has served in Washington for more than four decades of his almost 52-year medical career, recently celebrated retirement alongside with his partner in medicine, RN Sandy Harris, at Healthworx, the clinic where they worked in tandem for many years. (Healthworx)

For nearly 52 years, Dr. Frank Sheldon has been a healer. From taking care of his patients’ physical ailments, to helping them navigate their spiritual needs, he’s become a fixture of the medical community in Beaufort County since he came to Washington 43 years ago.

The good doctor recently celebrated his retirement from practice, along with his longtime partner in medicine, Sandy Harris, RN. The two worked together for many years at Healthworxs, on Carolina Avenue, previously Carolina East Medical Associates.

Long before that, however, Sheldon was a surgeon in Williamston in the mid-1970s. It was about the same time that doctors at Beaufort County Hospital were looking at making changes in the facility’s emergency department. Seeking to make one of the state’s earliest physician-run emergency rooms, they invited Sheldon to come on board.

“I came here in 1977, and it was probably one of the first physician-run emergency departments in North Carolina,” Sheldon recalled. “At that time, it was just fill-in people. They had people from the Marine base and places like that who would come in on the weekends to cover the ER. The doctors there wanted to put together something more permanent, and that’s when they asked me to come.”

For two decades afterward, up until 1997, Sheldon was a key figure in the emergency department. After that, he continued for two more decades in private practice, much of which was spent in urgent care, seeing those who needed it the most.

“I can never remember a day of getting up and not wanting to go to work,” Sheldon said. “I’ve always been excited, because going to work in my profession was dealing with people, and people are the most important thing. I always found it exciting, because each and every day was different.”

In his more than five decades of medical service, Sheldon says advances in technology have changed those interactions dramatically, as has the addition of more specialty fields of medicine.

“It’s allowed procedures to be done that couldn’t be done before and made things a lot safer and quicker for patients,” Sheldon said. “The only downside, in my view, is that the doctor-patient relationship has degenerated. It’s more people dealing with computers and less contact.”

Sheldon, however, who was trained in the “old school” way of practicing medicine, has always tried to maintain that closeness with his patients. In talking with patients, and actively listening to their ailments, Sheldon says it important to take the time to fully diagnose and treat a person, rather than just go through the motion and check off all the boxes.

It’s that quality, of maintaining the human connection in medicine, that has endeared Dr. Sheldon to so many patients in Beaufort County across the years. So too has his way of caring for his patients’ spiritual needs.

“The first time I had an encounter with Dr. Sheldon, I had a femur infection or something,” recalled Washington resident Bartow Houston. “He had had a full career, but was still working at a doc-in-a-box, where you could walk right in. When he came in, he asked me what my situation was. I told him, and the first thing he said was, ‘Well, we will treat you spiritually and medically.’ He wasn’t trying to put on a holier-than-thou persona — that’s who he is. People don’t like Frank Sheldon. They love him.”

Janet Watson, another patient of Dr. Sheldon’s echoes that sentiment, recalling a time when he helped her find comfort during a time of loss.

“My husband had just passed away, perhaps the very week I was in Dr. Sheldon’s office,” Watson said. “I think he could see what I was going through, and asked if he could pray for me. That just meant so much to me, that he was a man of faith who believes in God. That allowed me to have so much faith in him and trust him as a physician. He is just a wonderful man.”

Barbara Arnold, yet another of the thousands of people Sheldon has treated during his career here, found comfort in both the doctor’s faith and his professional dedication to his patients.

“His faith is at the forefront, and it was the first day that we met him,” Arnold said. “He practiced urgent care when we first came to Washington, in the back of Pamlico Internal Medicine. Over the years, when we couldn’t get to our primary care doctor, we could always get to Dr. Sheldon. He is the only doctor that has ever given us his cell phone number. If we were in need, we could call him. We just think he’s a prince of a guy.”

For all the kind words and good feelings, Sheldon, however, redirects all the credit, and all the glory, back to God. He maintains that Christ is the ultimate healer in the world, and believes in the power of the divine to heal the world.

“As the old saying goes, ‘The heart of the problem is the problem with the heart,’” Sheldon said. “I think that’s where we are today. It’s where we’ve always have been, but it’s more accentuated today. So I feel strongly that people need to have that relationship and prayer can certainly heal. I think praying for people, and for their illnesses, is certainly important, because prayer does work.”

A previous version of this story incorrectly captioned a co-worker pictured with Dr. Sheldon as being Sandy Harris.