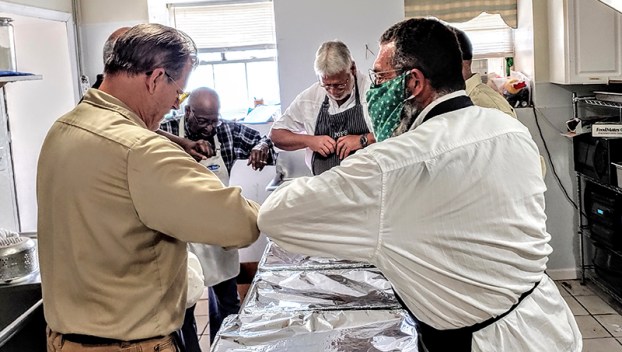 Robert Harris has seen many challenges in the 30-plus years since he founded Zion Shelter and Kitchen. Hurricanes and floods have tested Harris and his dedicated staff, but “not like the COVID,” he said last week. Still ready to fight the odds, Harris called the last few months a “learning adventure.”

Numerous pandemic-related challenges are faced daily by the five staff members who run Washington’s only men’s shelter. Occupancy has increased. Intensified mental health issues have complicated the management of relationships among residents, according to staff. Pandemic-related changes to keep the lunch outreach safe have complicated the feeding of up to 50 hungry people every day. Supplies and financing are down and, in direct correlation, stress and frustration are often almost as prominent as the dedication that keeps these staff members going.

So far, there have been no COVID-related illnesses at the shelter.

“Back in March, we weren’t aware of the extent of the virus, so there was no screening, no testing or anything else” said Jonathan Gaskins, shelter case manager since 2012. “Now, everyone gets screened, with signed paperwork. Nightly temperature checks are standard procedure. Even for staff. Nobody’s had to leave so far.”

Gaskins said the only related “scary moment” since March was caused when one resident “gave the standard flu to everyone.”

Zion Shelter Assistant Director Keith Harris added that increased screening capacity became available to the shelter just last week, because town health authorities were “limited by supply delays and their priority list, but they finally got enough of the kits to be able to test us.”

The presence or lack of pandemic-related symptoms has not been the only cause for concern since March.

“We get people who are suicidal as well as homeless, when they are released from Vidant (Beaufort Hospital), which no longer has a psych ward. We also get people straight from the prison system,” Gaskins said. “We get no personal information because of HIPPA. I understand privacy concerns, but we have to deal with these folks, and I need to know how to protect my people. We had our first physical assault last month, in all the time we have served the homeless.” Gaskins said shelter staff is now considering the possibility of doing background checks “on every person, like the women’s shelter, because it’s getting worse. News is circulating that Zion is not as restrictive as other shelters, and that gets around.”

Keith Harris said food donations have slowed, but the community is still stepping up to the plate on their behalf.

“Donations are way, way down,” Gaskins added, “but God is still supplying, even though we don’t always know where it’s going to come from. If it wasn’t for Eagle’s Wings and Mother of Mercy, as well as a few other ‘regulars,’ it would be tougher. But we would still feed them.”

Harris said the most urgent — and recurring — kitchen need is for “fold-top take-out trays, like the ones used at restaurants” as well as plastic forks and spoons. Knives are not distributed at the shelter, not even plastic ones. Harris said he has a supplier, but doesn’t always have the funds for a case of 200 plates.

Regarding the future, Gaskins said shelter success stories are “rare these days. I keep seeing the same faces over and over, and COVID has increased that repetition. Success stories are far and in between, but they are there. That’s what I live for.”

The senior Harris added that, overall, dealing with pandemic-related changes has been good because “We know how to handle things better. Everything can’t be done like it was before.”

He said everyone’s prayers “must be working, because how many 94-year-olds are walking around doing what I’m doing? We’ve never stopped serving our homeless for one day since this happened, and we will stay open unless one of us gets the virus.”

Ralph and Sawyer reappointed to planning board

The Tyrrell County Board of Commissioners reappointed Steve Ralph and Tony Sawyer to the county planning board on June 2.... read more