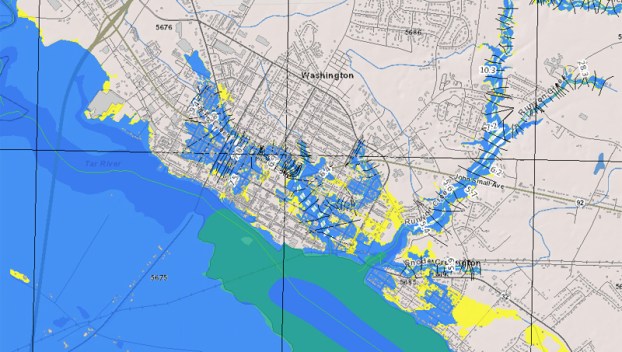 IN AND OUT: According to city officials in Washington, the new flood maps that went into effect in June cut the area covered by the city’s flood plain by about 50%. Countywide, close to 5,000 addresses are no longer in the flood plain, but officials are encouraging property owners to not drop their flood insurance too quickly. (North Carolina Flood Risk Information System)

Thousands of addresses in Beaufort County have been removed from the flood plain under new federal flood maps that went into effect earlier this month, but local officials are urging residents to consider their situation carefully before dropping their flood insurance.

For those property owners, being removed from the flood zone means a couple of things. For one, they will no longer be required to carry flood insurance by their mortgage company. It also means those who choose to keep their insurance will likely see their premiums reduced considerably. But Beaufort County Manager Brian Alligood says people should not be too quick to drop their insurance.

“What we’ve tried to message to people is, ‘You know where you live, you know where it floods.’ Just because the map says you’re not in a flood zone anymore, don’t drop your insurance. It’s going to be a whole lot cheaper, but you’re going to need it,” Alligood said.

While the county handles flood plain management and inspections for unincorporated areas, and most municipalities in the county, Washington and Belhaven provide those services for their residents. From officials in those towns, the message is similar — now is a good time to review both where your property falls on the flood maps and take a closer look at your insurance policy.

“Just eyeballing it, it looks like roughly 50% of the area that was in the flood plain is no longer in the flood plain in Washington’s jurisdiction,” said Washington Director of Community and Cultural Services Mike Dail. “A lot of the flood elevations have come down, so less people will be required to carry flood insurance by their mortgage company because of that. But I think it’s wise to put out there that, if your home has flooded in the past, you probably need to keep your flood insurance.”

On the plus side, those who have been removed from the flood plain may pay significantly lower premiums should they choose to keep their flood insurance.

Belhaven Town Manager Lynn Davis says while few locations in town are not included in the flood plain, base flood elevations have been reduced from seven feet to five feet for most of Belhaven. This could also mean savings for those who have already built to that seven-foot threshold.

“What we have encouraged our citizens to do, if they have a question, it’s a good time now to have a surveyor do a flood-elevation certificate,” Davis. “That way, they have a true new elevation.”

For local insurance agencies, such as Flatlands Jessup Insurance Group, the new maps mean revisiting clients’ policies and offering guidance on how to best protect their property. Flatlands Insurance Group Agent Carmen Folk says her agency plans to reach out to clients in the coming weeks. She too encouraged local residents not to drop their insurance too quickly, adding that it takes up to 30 days for a new policy to go into effect if they change their minds.

“I would say, definitely reach out to your insurance agents or carriers,” Folk advised.

While Flatlands is reaching out to its clients, property owners should take the initiative to research their property, as local governments won’t necessarily distribute notices on the changes.

“We do encourage everybody to go check,” Hayes said.

For those navigating the changes, the first place to start is by visiting fris.nc.gov. From there, one can search specifically for an address and find a property’s flood risk and base flood elevation, a tool to estimate flood insurance premiums on a monthly and annual basis. Beaufort County is also working on adding a layer to its GIS system to allow residents to easily browse flood-risk data. That system is accessible at maps.agdmaps.com/nc/beaufort.

Update: per the BCSO, Gibbs was found around 5 p.m. Tuesday by the Washington Police Department, and has been returned... read more