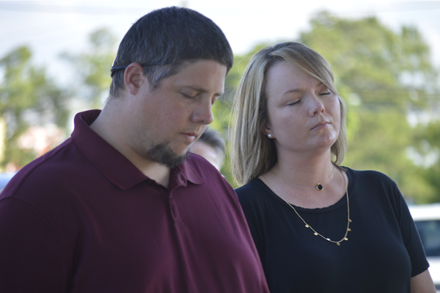 The power of prayer

Turn on the TV or pick up a national newspaper these days, and you’re bound to see headlines about protests and a renewed push for racial justice and police reform in the United States. It’s been the biggest story of the past month, save perhaps the continued spread of COVID-19.

Here in Beaufort County, there’s been a unique response to recent events. So far, there have been three protests in the Washington. All three were well attended and sent a strong message. None resulted in violence, destruction of property or confrontation with law enforcement.

What’s just as interesting, however, is the recent phenomenon of community prayer meetings that have sprung up in Beaufort County. So far, there have been four such gatherings in Washington, plus one in Belhaven this week. At each of these events, Christians of all denominations have set aside race and cultural backgrounds in acts of solidarity, love and concern for their brothers and sisters.

Perhaps one local pastor put it best. To paraphrase, he said that, “marching may change laws, but God can change people’s hearts.”

That is to say, yes, there are actions we should to take as a society to ensure justice for all people. Protests can help bring attention to the work that must be done in city halls, state legislatures, courtrooms, law enforcement agencies and at the ballot box.

But to change people’s hearts? That’s a powerful mission, and an ambitious task, but that’s what it will take for our country and our communities to move beyond the dividing lines of race that have kept people apart for so long.

Another powerful sentiment recently came from a local municipal council member, who helped organize the prayer event in Belhaven. He said, “Whenever there’s injustice, we need to go against it. We’re not a people who want to put others down. We want to create justice towards each other. That’s the whole point of being an American, is creating more freedom for everybody. At the same time, we don’t fight evil with evil.”

These community prayer meetings are helping plant that seed here locally. By focusing on something greater, a higher power than any one individual person or movement, these Christians are sending a message just as powerful as any protest seen in the United States so far.

They are saying loudly, and clearly, that injustice and racism are intolerable. They are embodying the idea that we are stronger as a community when we are united, rather than divided. Together, they are a chorus of harmonious voices, addressing the ills of the world as they are now and still hoping for a better day to come.

In bringing the faithful of all races together in prayer, these acts of community worship may yet play a larger part in making Beaufort County better. Perhaps in time, as the old parable goes, these small seeds will move mountains.

Proactive or passive — it’s a choice

The longest day of the year has passed. It’s officially summer, and Fourth of July weekend is quickly approaching. The... read more