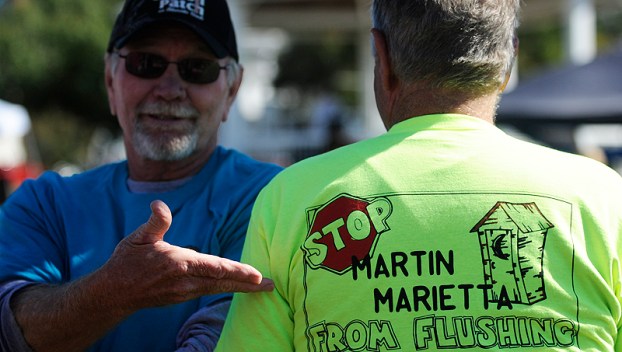 The fate of Blounts Creek is once again in the balance, this time before North Carolina’s Supreme Court.

In June, Sound Rivers and North Carolina Coastal Federation, as well as Blounts Creek residents and business owners, were dealt a blow by the North Carolina Court of Appeals when it overturned a 2017 ruling that gave those entities the right to challenge a state permit issued to a mining company.

The ruling, made by Judge Joshua Willey Jr.  in Carteret County Superior Court, retracted the  permit that would allow Martin Marietta Materials to potentially discharge up to 12 million gallons of water per day into the brackish headwaters of Blounts Creek, part of the operation of a 649-acre pit mine proposed in southern Beaufort County.

Friday, the Southern Environmental Law Center filed a petition in response, again arguing that the state permit failed to protect the waters of the creek, a tributary of the Pamlico River known for fishing and recreation.

“The state permit fails to uphold the core requirement of the Clean Water Act: to protect our waters as they exist naturally,” said Geoff Gisler, senior attorney at the Southern Environmental Law Center. “Blounts Creek deserves the full protection that the law provides.”

The appeal marks nearly six years of court hearings and nine years of attempts by Sound Rivers and Blounts Creek supporters to prevent the permit from being put into effect,  a process that started when Division of Water Resources began researching the prospect in 2011.

According to Sound Rivers, Martin Marietta’s mine discharge would transform the swampy, slow-moving headwater habitat into a fast-flowing stream consisting primarily of mine wastewater, and permanently alter the creek’s diversity of fish and the quality fish habitat that make it a nursery for such species as red drum and river herring. While attorneys for Martin Marietta agreed the wastewater discharge would alter the flow of the creek, change its pH and not support the creek’s existing diversity of fish species, they have argued that other species would flourish with the change.

“Generations in Beaufort County have grown up fishing and boating on Blounts Creek,” said Heather Deck, executive director, Sound Rivers. “The natural diversity of life in Blounts Creek is beloved by the local community and many families across the state who want to ensure the creek is protected for future generations.”

Under federal and state law, North Carolina cannot authorize discharges that will violate water-quality standards by changing the natural mix of wildlife in a water body — state wildlife agencies and the Environmental Protection Agency objected to the plan before the permit was issued by DWR.

According to Deck, Sound Rivers, NCCF and members of the Save Blounts Creek group — a mix of Blounts Creek home and business owners, fishermen and recreational users of the creek created in support of  the court challenge — the objection is not to the proposed limestone mine; rather, it is to MMM not exploring several other, less potentially damaging options to dispose of the wastewater.

From toilet paper to common household foods, the COVID-19 pandemic and its ripple effects have led to considerable shortages of... read more