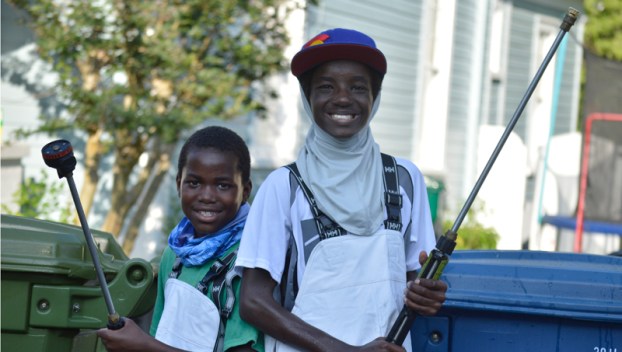 TRASH CAN KIDS: At ages 10 and 11, respectively, Solomon and Sam Boltes have made a lucrative business cleaning garbage and recycling bins throughout the city this summer. So far, the boys have brought in nearly $900, exceeding their initial goal of making $600 by November. (Matt Debnam/Daily News)

For many young people, a summer job is a way to build character, make money and find the beginnings of financial independence. This summer, two brothers in Washington’s western historic district, and a group of kids in the Nicholsonville neighborhood, have done more than just get a job — they’ve started their own businesses, all before they’re old enough to drive.

In the past few weeks, folks in the Nicholsonville area may have noticed a roving band of seven kids on bikes. Together, the group makes up Market Street Lawn Care, a business founded by Avery, Oliver and Anderson Thomas, Jacob, Layton and Graham Spivey and Nash Pippin.

“We were kind of bored most of the day, and we wanted to make a little money,” Avery Thomas said. “We’ve been hanging around each other all through the quarantine and stuff, so we were like, ‘Why don’t we start a lawn business?’” 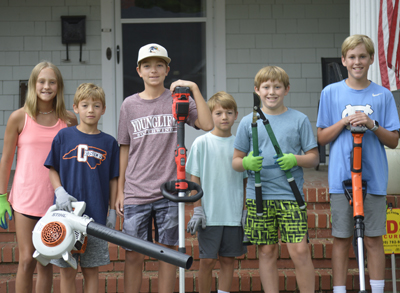 Ranging in age from 9 to 13 years old, the team of seven started by printing out their own fliers, canvassing the neighborhood and promoting their business through word of mouth. Charging according to the size of the yard, the team splits up the work equally, with some mowing and weed-eating while others trim hedges and do other work.

It’s been about a week since they started up, and Avery Thomas says they’ve had a great response so far. As with the work, they divide the pay equally, with each kid earning enough to put some money away.

“We’ve got a bunch of people, actually,” Avery Thomas said. 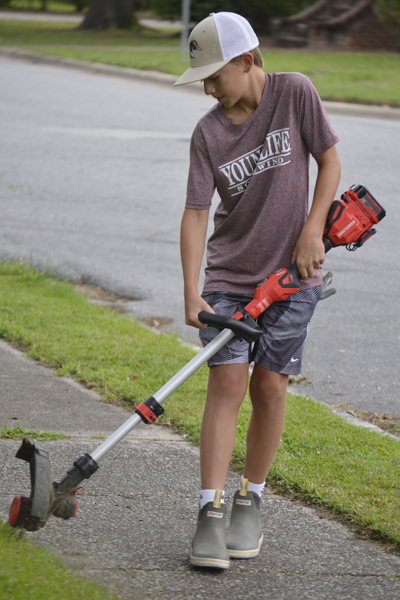 CLOSE CUT: Jacob Spivey takes care of the edging along the sidewalk outside a Nicholsonville home.

For safety reasons, and since the kids are just working locally in the neighborhood, their parents preferred not to include contact information. Nevertheless, Avery’s mom, Amy Gerard, says she and the other parents are proud to see the kids taking such initiative.

“It gives them a little independence and shows that they’re self-starters,” Gerard said. “They did it all on their own. They figured out who is mowing, who is weed-eating and who is blowing. None of us parents have had anything to do with it. They planned it, they’ve got the calendars, and they’re scheduling it. I’m just very proud of them for doing it.”

Exhibiting that same work ethic, two brothers in Washington are also bringing in the money this summer. Sam and Solomon Boltes, ages 11 and 10, are building a business cleaning garbage and recycling bins in Washington and Washington Park. Together, they are the Trash Can Kids.

“About two months ago, our dad found out his cousins do this job in Utah,” Sam Boltes said. “We figured out that this would be a good way to earn some money and get out and do something.”

Armed with pressure washers and cleaning supplies, the Trash Can Kids set their schedule based on garbage and recycling collections in the city, coming in to clean bins shortly after trash day. Knocking off the dirt and grime with water and a little elbow grease, the result after about 30 minutes of work is a clean, odorless set of bins. 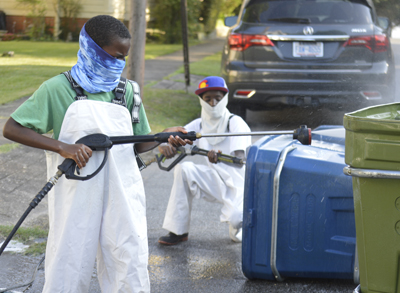 SPRAY AND WASH: Solomon and Sam Boltes work together to pressure wash a pair of bins in their neighborhood.

Charging $10 per can, or $15 for two, the business has been lucrative for the boys, with the take far exceeding their initial expectations. Setting out with a goal of making $600 by November, the boys have already brought in close to $900, which they say will go toward buying a new Xbox gaming console coming out this fall.

They’ve even been able to invest some of their money in a second power washer to make the work more efficient. For other kids who want to start their own businesses, Sam and Solomon both offered some advice.

“If you do a really good job, you’ll most likely get more money,” Solomon said, pointing to the tips they’ve gotten.

“Hard work gets you the things that you need,” Sam added. “Try to make your own money instead of asking people for theirs.”

Prospective customers can schedule service with the Trash Can Kids via their Facebook page @Trashcankids, or by calling their parents at 919-971-5157.

“It’s been great seeing them really take responsibility and some initiative,” Megan Boltes said. “I’ve never seen them work so hard, so it’s been exciting to see them put their energy into something constructive.”

With more adults working from home and children learning remotely, the COVID-19 pandemic has shed new light on the difficulties... read more