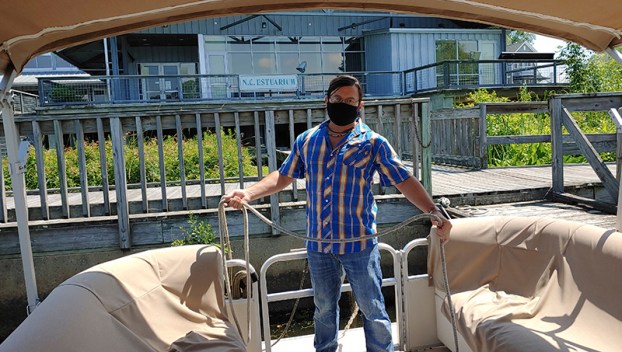 AT THE HELM: Russ Chesson, operations and programming specialist for the North Carolina Estuarium in Washington, talks about the changes being made to the returning River Roving tours. (Karen Thiel)

Summer fun on the river will increase next week — especially for those who don’t own a boat — when the North Carolina Estuarium resumes its popular pontoon boat river-roving tours.

Because of current COVID-19 pandemic-related restrictions, the 90-minute ride, which includes wide-water views and up-close visits with nature’s creek-born residents, will only launch once daily. The first river ride will depart from the Estuarium on Wednesday. Only one trip per day will be offered at this point, which leaves the dock at 10:30 a.m. Wednesdays through Fridays. In order to comply with social distancing regulations, the free river tours will be limited to six people per trip.

“We take people along the waterfront and up Tar River, then into Bear Creek as we talk about the history of Washington’s maritime culture and the eco-system of the Tar-Pamlico River,” said Tom Stroud, the Estuarium’s long-time director. He added that the ride is perfect for “locals who have no other opportunities to go out on the river or people from out of town who don’t have an appreciation of the beauty of the river until they actually get out on it.”

The Estuarium’s lead educator, Russ Chesson, described the ride as “slow and steady, a very easy-going, gentle cruise.” And as much as it is loved by adults who tend to return often after their first ride, Chesson said the experience is even more thrilling for children whose first step onto the 25-foot pontoon boat is the beginning of their first experience away from land.

“One of my favorite parts of this job is to take kiddos from town who have little-to-no awareness of what’s outside of their street and let them see what’s around them. You can’t care about something if you don’t know it exists,” said Chesson, a Washington native who returned here after leaving a social work job in Arizona.

Chesson said those “teachable moments” are the reason he has worked outdoors and with children since high school. He said his happiest moments on the water are when the children first stare, slack-jawed and wide open, at the beavers, dragonflies, ospreys and other water-born creatures that are features of the tour.

The Estuarium’s river tours have been running since 2000. Stroud said that, although the offering may have been his idea, “it has taken a lot of people to make it happen.” He said the Estuarium’s volunteers include greeters, gift shop attendants and an endless supply of boat captains who are all experienced boaters, who just love the river and taking people out to talk about Little Washington, the estuary, and the river.

The river trip is free.

“Donations are clearly welcome, but not required. We have been able to take a lot of people out onto the river who otherwise would not be able to do that if we charged for it,” Stroud said.

Life vests are supplied by the Estuarium. The pontoon boat has a canvas covering, but those with sunburn tendencies should still bring sunscreen. Children must be at least 6 years old to participate. Bottled water may be brought onto the boat, but not snacks. Stroud said reservations are a must.

“Especially now, because the chances of just walking in and being able to get on a boat are pretty slim,” he said.

Both Stroud and Chesson said they look forward to eventually functioning according to their pre-pandemic schedules. With the exception of the gift shop, the Estuarium building has been closed and all programs paused since North Carolina Gov. Roy Cooper’s shut-down order went into effect at the end of March.

“We’ve been just thrown very much off-kilter with the COVID close-down,” Stroud said. “April starts our busiest season, and we haven’t been able to do any of that this year. We have been very cut back, but we are trying to find new ways to connect with the public.”

Stroud said those efforts include remote programs, a handful with some groups, and Chesson has been doing some off-site programs at schools and camps.

Chesson said he can hardly wait to ramp back up once pandemic restrictions eventually ease. He said he is already planning a nature-based play group in the fall, where there will be kids playing with sticks instead of a cell phone.

Sports opportunities lost, but not at a city loss

By STEVE BARNES For the Washington Daily News Instead of metal bats pinging and crowds cheering, the most likely sound... read more