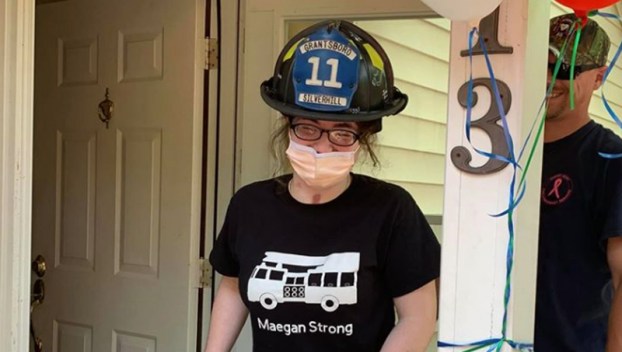 A Pamlico County firefighter who was seriously injured in the line of duty received a hero’s welcome Monday as she returned home after four months in the hospital.

On Monday, after 124 days in five different hospitals, an escort of firefighters from her home department, Aurora VFD and the Red Oak VFD finally brought her back to Pamlico County. Reaching Craven County, the convoy was met by firefighters from various departments, stationed on overpasses to cheer on Speciale. 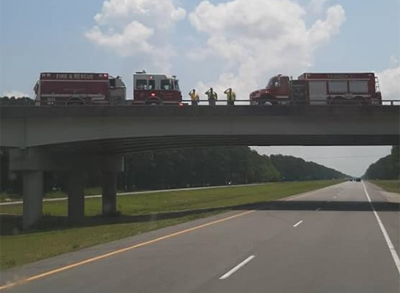 Crossing into Pamlico County, Eric Kindle, a family friend and assistant chief at the Southeast Pamlico Volunteer Fire Department, says even more first responders joined the convoy to usher Speciale home. Kindle led the escort to the doorstep of a home that has been set up for Speciale in Oriental, his vehicle decorated in paint bearing the messages “Welcome Home” and “Maegan Strong.”

For her colleagues at Grantsboro/Silverhill VFD, the homecoming was cause for celebration, according to Amanda Heath, the department’s assistant chief.

“It was really a time of joy and excitement,” Heath said. “We’re really happy to see her home and for her to have the ability to see her friends and family, now that she’s out of the hospital. When she entered into the hospital and had woken up, the coronavirus closed the hospital to visitors. Yesterday when she came home, we tried to get her to go in the house, and she wanted to stay out and speak to everybody first.”

Kindle, who is helping out the family in any way he can, says Speciale still has a long way to go to recovery, but is happy to be home.

“Last night was uneventful,” Kindle said Tuesday. “She slept well and her mom has been an absolute trooper through this thing. Her mom will be living with her for the foreseeable future. We got her a place in Oriental, and she was very excited to sleep in a ‘real bed’ after 124 days in five different hospitals. She’s still got a long way to go and will continue to have physical and occupational therapy.” 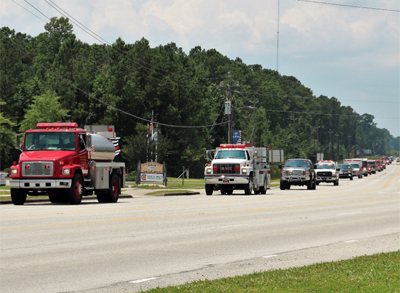 For first responders in both Pamlico and Beaufort counties, the accident has put a spotlight on roadside safety when responding to emergency calls. Heath and Kindle both strongly encourage drivers to exercise extra caution when approaching a scene where first responders are working.

“Accidents like this are one of the top reasons why first responders get injured or killed in the line of duty,” Kindle said. “We’ve always tried to take it pretty serious, but this has definitely kicked it up a notch. … I want to remind folks to slow down not just as they approach the scene, but as they work their way through the entire scene.”

According to North Carolina State Highway Patrol 1st Sgt. Gary Brown, the driver who hit Speciale, Linda Ann McCollum, was charged with failure to reduce speed and exceeding a safe speed due to weather conditions. While there are specific laws on the books which address causing the death or serious injury of a first responder, Brown said that due to the circumstances, the NCSHP decided not to charge McCollum according to those laws.

“It was all instantaneous, basically,” Brown said. “(The firefighters) pulled up and jumped out of the truck while the lady was coming around the curve in the pouring rain. Because of the situation, and with guidance from the district attorney’s office, we sat down and ran through everything and those were the charges we felt were warranted in the case.”

Anyone wishing to contribute financially to support Speciale and her family can do so by contributing to an online fundraiser at here. Donations can also be made at any First Citizens Bank branch by donating to the “Maegan Strong” business account set up to help cover the costs of her recovery. Finally, a fundraiser lunch to be held July 18 at the old Piggly Wiggly in Aurora will also help raise money for the Speciales.

The Beaufort County Sheriff’s Office is investigating a fatal shooting that happened Friday on Mimosa Shores Road. According to a... read more