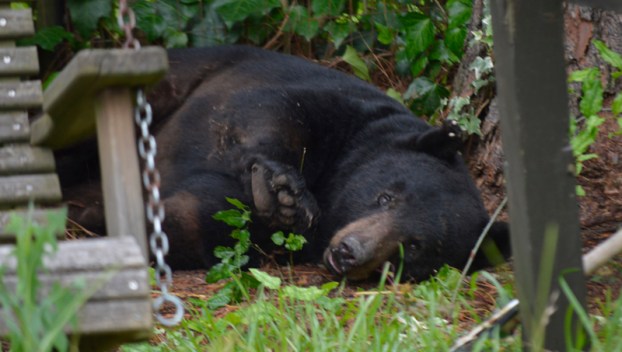 SEEKING INFO: A $10,000 reward offered by Help Asheville Bears, a black bear advocacy group in the mountains, has brought information to local authorities that could help track down the person who shot and killed a black bear on Van Norden Street on June 25. (Matt Debnam/Daily News)

An Asheville-based black bear advocacy group says it has a $10,000 reward ready for a local tipster who shared information about the illegal killing of a black bear in Washington two weeks ago — if that information leads to charges and a conviction.

The 403-pound black bear was shot and killed after wandering onto Van Norden Street on June 25. Officers from the North Carolina Wildlife Resources Commission and the Washington Police Department responded to reports of a bear in the area around 6 a.m. that day, then left the scene mid-afternoon after the bear went up a tree.

At about 5 p.m., they received a call that the bear had been shot, and found six 9mm shell casings near where the bear lay dead. Both agencies have been looking for the person responsible since then — the NCWRC for shooting the bear out of season and the WPD for discharging a firearm in the city limits.

Jody Willams, a member of Help Asheville Bears, says his organization received a tip from someone in the area soon after sharing the reward information. Based on that tip, which included screenshots of a social media account of a person claiming responsibility for the shooting, HAB then passed that information along to the NCWRC.

According to NCWRC Sgt. William Cain, local investigators are reviewing the information provided by HAB, but no charges had been filed in relation to the shooting as of Thursday.

“We’ve had a few leads come in that we’re working, but no smoking gun so far,” Cain said.

According to the HAB website, the organization is a privately-funded nonprofit that seeks to put an end to illegal bear trapping. According to a press release from the organization, HAB has distributed more than $80,000 in reward money since its founding for information related to the illegal poaching and trapping of bears, as well as the sale of bear parts and organs. Williams says the organization pays tipsters with certified checks.

“A dozen or so bears (have been illegally poached) around the Asheville area, 17 within 90 miles, and then two more towards the East Coast,” Williams said. “This whole thing has opened our eyes to how bad illegal trapping and poaching is, and it’s because of the bear-part trade. Your bear in Washington was a little different. It was just poached and senselessly killed for no reason. We just care about the bears, and our reward runs for five states right now.”

For more information on HAB, or to report an instance of illegal bear trapping or poaching, visit helpashevillebears.org. All wildlife violations in the state can be reported to the NCWRC at www.ncwildlife.org/wildtip or by calling 1-800-662-7137.

From the high-end boat manufacturers of today to the shipyards of centuries past, Beaufort County has long held a reputation... read more