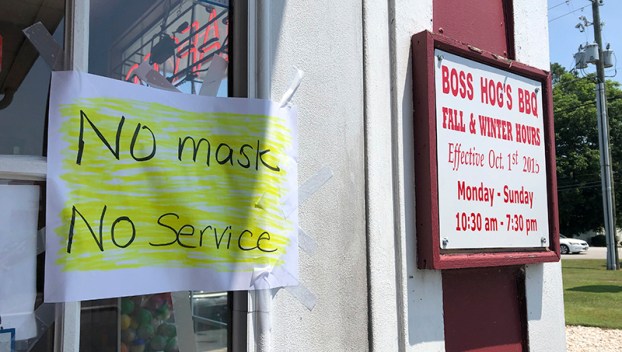 AN OUNCE OF PREVENTION: Some Beaufort County businesses are being vigilant about the statewide rule to wear masks in public in an effort to prevent the spread of COVID-19 in the community. While Beaufort County is faring well compared to surrounding counties, the percentage of positive cases continues to rise as more testing and more contact tracing are done. (Vail Stewart Rumley/Daily News)

The number of COVID-19 cases is on the rise in Beaufort County: in the first 10 days of July, the confirmed case count increased by 53. According to Beaufort County Health Department Director Jim Madson, there are a few reasons behind the numbers.

“One is that we’re doing more tests. Prior to June 15, we were doing about 200 tests per week, now we’re doing 375 per week, so we’ve almost doubled the number of tests,” Madson said. “Because we’re doing more testing, obviously, we’re going to find more cases. Also, we’re bringing in all close contacts (of positive cases), and we’re testing them — with those concentrated numbers, a higher percentage of them are going to test positive.”

“For example, groups of people when on a vacation together, or people who work together or people that maybe live in the same neighborhood — that’s very similar to being close contacts,” he said.

The number of positive cases in Beaufort County is a lesser concern than the percentage of tests that are returned positive. That percentage hovered between 1% and 3% from the beginning of May until the end of June. It’s currently risen to 6% to 7% over the last two weeks. By comparison, the percentage of positive tests returned is 10% statewide.

“As a whole, Beaufort County is in a good situation right now,” Madson said. “Our number (of positive cases) per 10,000 looks better than the counties surrounding us. We’re around 22 (per 10,000 people); Pitt County is 45 and Martin is 63. That’s total cases since the pandemic started.”

Other county statistics include positive cases according to age, gender and race. In Beaufort County, 44% of those who have tested positive for the virus are 25 to 49 years old; 18% are 50 to 64 years old. Approximately 60% of positive cases are female; 40% are male. By race, the breakdown of positive cases is 44% White, 44% Hispanic and 12% Black.

“Right now, I would say that it’s actually hitting the Hispanic population a lot harder,” Madson said, adding that the health department recently hired two Spanish-speaking interpreters to help with contact tracing and educational outreach within the Hispanic community.

While Madson said he is concerned about increased numbers, health department staff is being vigilant about contact tracing — getting people testing and isolated if positive — to prevent the spread of the virus. The health department also provided testing to the public at two drive-thru testing events held earlier this week at Beaufort County Community College and Southside High School. Nearly 400 tests were administered, as of Friday morning, 43 had come back, and all were negative, Madson said.

He encouraged people to continue to take precautions to prevent the spread of COVID-19, because the virus will likely be around for a while.

“I think people are starting to relax a lot. I think people are starting to get tired of what’s going on, and they are not always practicing the social distancing, handwashing and wearing masks,” Madson said. “The belief that we have is that it’s going to be something that we continue to live with over the next year. There’s going to be waves of it.”

All eyes are on Raleigh next week, as North Carolina Gov. Roy Cooper is expected to make two important announcements.... read more