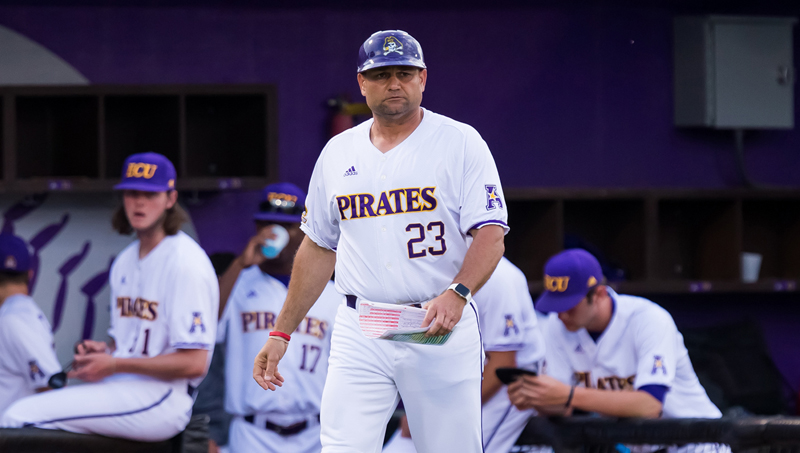 “I’m extremely grateful to Jon Gilbert, Ron Mitchelson, J.J. McLamb and the East Carolina University Board of Trustees for allowing me and our staff to continue leading this program,” Godwin said. “It’s an honor and a privilege to be the head baseball coach at ECU. There are very few people who have the opportunity to lead their alma mater and I hold that responsibility in the highest regard. I am extremely proud of what our players, staff and fans have accomplished over the last six years and they deserve all the credit. That said, we are striving every day to be better as a team on the field, better leaders, better students and continue to be great ambassadors for ECU. Go Pirates!”

During his six years at the helm of the program, Godwin has guided ECU to four NCAA Regional berths, two Super Regional appearances, the 2019 American Athletic Conference regular season title, a pair of AAC Tournament crowns, three 40-plus win seasons and a 214-113-1 (.654) overall record. Ten players have earned All-America status, 10 were NCAA All-Regional selections, while 16 were named all-conference (15 first-teamers) and 13 were drafted by Major League Baseball teams.

“Our baseball program has achieved comprehensive success under Coach Godwin’s leadership and this contract extension is a deserving commitment to ensure that continues well into the future,” Gilbert said. “He embodies East Carolina’s values on the field, in the classroom and in the community, and exemplifies the best of what intercollegiate athletics represents.”
Off the field, his teams have excelled in the classroom by registering a 3.05 or higher grade point average in 11 of 12 semesters, including a team-best 3.61 during the 2020 spring semester, which bested the previous mark of 3.52 in the fall of 2017. Under Godwin, a two-time Academic All-America selection as a student-athlete himself, the Pirates have had a combined 300 members on the ECU Director of Athletics Honor Roll, with GPAs of 3.0 or higher. Additionally, 66 players have earned inclusion on The American All-Academic Team, maintaining a minimum 3.0 GPA.