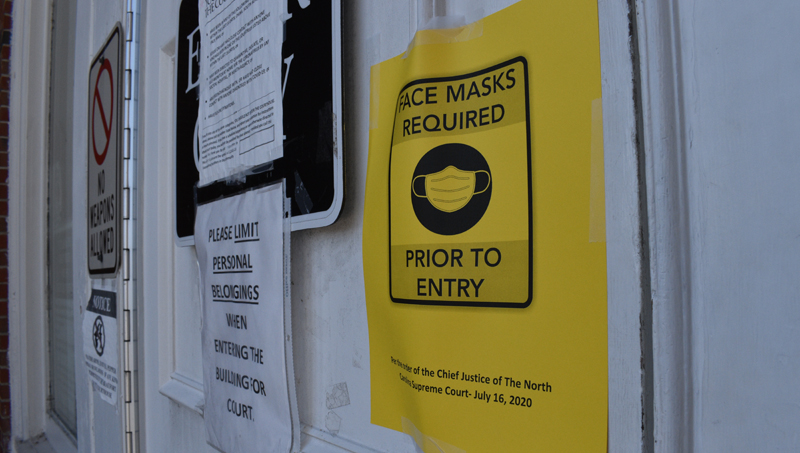 As of Thursday, security guards at the Beaufort County Courthouse have been directed to enforce the order, according to Beaufort County Clerk of Court Marty Paramore. Those without masks won’t be turned away, however, and courthouse staff will provide a mask for any visitor who needs one.

Paramore says he sees the new mask mandate as another tool to help protect the public, courthouse employees and keep the court system running.

“There have been situations where we have people who work in the courthouse maybe knew somebody or were around somebody that that had the virus, and it was necessary for them to go home,” Paramore said. “When you lose staff members, you can’t absorb but so much, and it’s a possibility you shut the court system down completely. I know that’s happened in other counties.”

It’s a concern shared by Beasley, who cited the potential shutdown of court systems as part of the rationale behind her order. In March, she issued an order suspending most court operations, aside from remote proceedings, due process proceedings such as first appearances and emergency situations such as obtaining a domestic violence protection order.

“In June, courts began conducting a greater number of in-person proceedings following the expiration of the first emergency directive that I issued in response to the pandemic,” Beasley wrote. “Since that time, dozens of court personnel have contracted COVID-19 and numerous courts have been forced to temporarily close so that the facilities could be sanitized and employees with possible exposure could be tested. If we are to continue conducting a greater number of in-person proceedings, it is vital that we utilize all available tools to limit the transmission of the virus.”

The order contains exemptions for those who cannot wear a face covering due to health or safety reasons, who are actively eating or drinking, who are communicating with someone who is hearing-impaired in a way that requires the mouth to be visible, who are temporarily removing their face covering to secure medical services or for identification purposes, or who are under 11 years of age.

In Beaufort County, Paramore says adjusting court operations to account for COVID-19 has presented one challenge after another. From having courthouse staff wear masks, to installing plexiglass barriers in strategic places to help reduce contact with the public, there are already a number of precautions in place.

While the court system has gradually increased the number of cases going before a judge, Paramore says many have been continued, creating a backlog for the judicial system. According to Thursday’s order, it may be October before jury trials resume statewide.

“We have to have court to live in a civilized society, and the judges recognize that, but we needed to try to do it safely,” Paramore said.