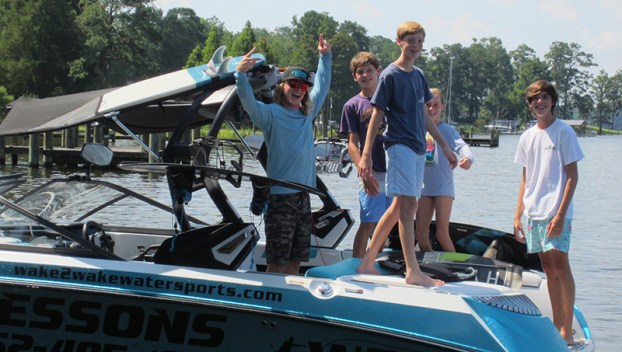 Wakeboarding school offers tips and tricks of the trade

BATH — It’s safe to say that Superman, Pete Rose and Moby Dick have never hung out. However, they all have wakeboard tricks named after them.

While COVID-19 continues to hamper some traditional land-loving summer activities, Corbin Minor has made sure there’s an option for those who enjoy having fun on the water.

The 24-year old Minor started Wake2Wake Watersports in 2017, literally in his own backyard at Bath Harbor Marina, and has seen business improve year by year. This summer was going to be his busiest yet, until the virus hit.

“We’ve had to cancel some camps, but we are still going strong,” said Minor, who grew up in Bath and graduated from Northside High School. “We are limiting our bookings to related families and can have up to 10 on the boat. We’ve been busy Monday thru Thursday since June.”

Minor played the more traditional sports growing up and was on the soccer, basketball and baseball teams at Northside before attending University of North Carolina-Wilmington. He took up wakeboarding at 12 years old, and knew he’d found a sport that he could stick with.

“I failed a lot at first, but it was still really fun,” Minor said. “I loved being outside on the water, and I finally nailed my first flip when I was 14. I knew then that it was my sport.”

Minor chose UNC-W for college partly because it was near the water. The communications studies major with an advertising concentration went to work part-time at a wakeboarding school there, and the lightbulb went on.

“I figured out quickly that this would be a great business to start right here on Bath Creek,” he said. “I was already spending 12 hours a day working for someone else, so why not take it home and work for myself. I love introducing people to the sport and watching them get better. It’s really cool when they land their first trick.” 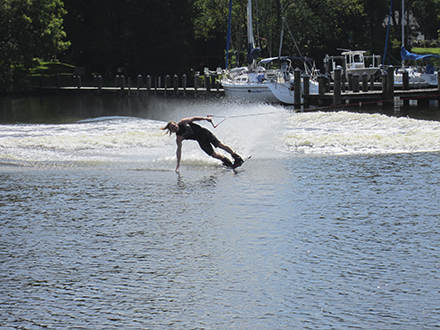 DEEP CUT: Corbin Minor lands a trick on Bath Creek. Minor owns Wake2Wake Watersports and is busy this summer teaching tricks to wakeboarders of all ages.

Wakeboarding is similar to waterskiing, but there is only one board, a foot-and-a-half wide by four to four-and-a-half feet long. A pair of boots is bolted into the board, so it all functions as one piece of equipment.

A rider laces up the boots, hops in the water and grabs the rope, and the boat, traveling from 12 to 20 mph, pulls them up. That’s where Minor takes over with coaching tips.

“Learning the tricks is the fun part,” he said. “If you invent a new move, you get to name it.” That’s how the Tantrum, the Whirlybird and the Scarecrow came to be.

“I named my business Wake2Wake because there are actually two wakes behind the boat. You try to jump over one, bounce and jump the other one before it flattens out. After that, you move on to the 180-heel grab, the 360-switch heel ride and whatever else you want to try.”

On a sunny weekday morning, Davis, 15, Maddox, 14, and Kate Calloway Lee, 10,  along with Gabe Niederhauser, 12, were back for their second of four sessions, each lasting four hours. The group of siblings and cousins had progressed from the basics to trying some more complicated maneuvers.

“The tricks are the most fun,” Davis said. “Corbin is a really good coach. The challenge is what makes it fun.”

“It’s a lot more fun than sitting on the couch,” Kate Calloway said.

Minor has taught people from age four to 80 and will arrange sessions to fit the group. For more information, go to wake2wakewatersports.com or call him at 252-495-1649.

On March 25, one of the first COVID-19-positive cases was identified in Beaufort County — an employee at Walgreen’s in... read more